In what is believed to be the largest settlement of an Open Public Records Act (OPRA) case in New Jersey, the borough has agreed to pay $650,000 to Gannett New Jersey to settle a lawsuit filed after borough officials denied a reporter’s OPRA request for electronically maintained municipal salary information.

“We are pleased and gratified that the Borough of Raritan has decided to resolve this case,” said Thomas Cafferty, attorney for Gannett New Jersey, the owner of the Courier News, MyCentralJersey.com and five other New Jersey newspapers. “Our client took no pleasure in pursuing this matter and did so at great hardship and expense, but it did so because of the importance of access to government records in a meaningful fashion.”

With no discussion or comment, the borough council voted unanimously Tuesday evening to settle the litigation which began when Gannett New Jersey filed suit more than six years ago over access to employee salary and overtime information. The newspapers wanted the data in an electronic format in order to compare and analyze salary information among many municipalities.

After denying existence of the records, the borough sought to pass on a $1,100 service charge to convert the data.

But Gannett proved during a 2012 trial that the borough had access to the records in the format requested through a third-party payroll vendor.

In April 2014, Superior Court Judge Yolanda Ciccone ordered that the municipality pay more than $590,000 in legal fees incurred by Gannett New Jersey. The law allows plaintiffs to seek legal fees from government agencies that were found to have improperly denied access to government records.

“Open records access is vital to good governance,” said Paul C. Grzella, general manager/editor of the Courier News/Home News Tribune/MyCentralJersey.com. “We have pursued this matter for so many years because of this simple fact, and will continue to work diligently on behalf of the community we serve.”

Mayor Charles McMullin, in his State of the Borough address in January after he was sworn into a four-year term as mayor, pledged to make the . . . 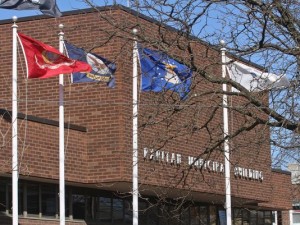 Raritan’s borough council voted unanimously Tuesday – without discussion or comment – to settle with Gannet New Jersey over litigation that was filed more than six years ago, MyCentralJersey.com reported (http://mycj.co/24SucP8 ) on Wednesday. The council also voted to dismiss a lawsuit it had brought against its former payroll company.

The settlement is expected to be paid in 90 days.

Gannett New Jersey – the parent company of the Asbury Park Press, Courier News, Daily Record and the Home News Tribune – sued the borough over access to employee salary and overtime information. The newspapers had wanted the data in an electronic format.

The borough initially denied the records existed, then said its former payroll company, Action Data Services in Fairfield, told officials there would be an $1,100 fee to convert the data. The borough then tried to pass that fee on to Gannett.

Gannett proved during a 2012 trial that the borough had access to the records in the requested format. Action Data Services waived the fee after the trial and handed over the data.

“Open records access is vital to good governance,” said Paul Grzella, general manager and editor of the Courier News, the . . .