Candidate for State Rep, Jim Acklin, has taken to lying about his opponent(s) and using his own “cover-up” of sexual abuse of a young girl by a teacher, thru failure to report the abuse as a mandated reporter, to further his ambitions of becoming a state representative and siphoning even more taxpayer funds into his own pension pockets.

How sick is that? Ignoring his own failures and blaming his opponent.

FACTS DO NOT CHANGE, BUT JIM ACKLIN REF– USES TO FACE THE FACTS

2008 – Acklin and others were notified of an allegation of sex abuse, thru handholding, hugging, kissing, attempts to “shove his tongue in my mouth“, and illegally providing alcohol and drinking alcohol with female students.

2012 – The teacher was charged with aggravated criminal sexual abuse.

It wasn’t until 2012 when Jim Acklin took any action, and it was FOUR YEARS too late, and only after law enforcement got involved…the damage had already been done.

How many other little girls became victims in those 4 years between notification and criminal charges?

Why was Acklin quoted as saying the young girl was partially to blame for the teacher’s actions?

Did Jim Acklin fail to report the allegations because he was friends with the accused teacher, whom Acklin and his son stood up in the teacher’s wedding party?

Is that how Acklin treats his friends and donators? “Sweep it under the rug“?

This article is simply to point out the Jim Acklin is blaming his opponent, who had NOTHING to do with the advertising by a PAC, nor by articles written by various news outlets, including ours.

Before Jim Acklin lies again: We are not financed by any candidate for office, any office holder, or any PAC – we receive funding thru our “Donate Now” button at the top-right hand side of this page, and thru the link at the bottom of this article.

When candidates Lie, we will do our best to expose it! 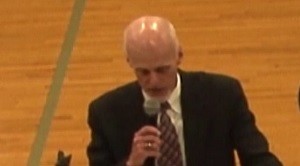