A recent editorial endorsement for Jim Acklin may just be the nail in the coffin for his election bid.  In their effort to support Acklin they failed to understand others are going to analyze their words and expose the lies and misrepresentations, one by one! When those running the local paper have to misrepresent the facts to support one of their local favorites, you know it’s time to cancel subscriptions.

Sadly, the Leader failed to ask when this claim of texting took place.  Yes, they report about it in 2012, however, they did not ask when the allegations were made.  The court records reflect allegations of sexual abuse were made in 2008, 4 years prior to the Leader article, not simply texting.  Was someone dishonest with the Leader in that reporting?  Why didn’t Acklin simply ask to see the text messages to confirm the claim it was all innocent?   (See Page 8)

The 16 Penney Nain in the Coffin!

Why would Acklin create a dummy Facebook account to friend the teacher?  Clearly, at a minimum, Acklin had doubts and/or suspicions as to what was going on.  Sadly for Aklin, the records report that he instructed the now-convicted sexual abuser to remove all students from his MySpace account and not let any more students on it.  Why set up a dummy Facebook account when it was MySpace issues being identified?

More importantly, if his concerns were enough to generate a dummy account to check up on this potential sexual predator, the proper course of action in most people’s minds would be to contact the police and have them set up the dummy account and let them perform a proper investigation.  Instead, Acklin played cop and kept the matter in-house.

How is not contacting the authorities in 2006-2007 so that a proper investigation could take place doing what is best for the students at SJO?  There is at least one sexually abused child that would take issue with that Editorial claim.

What is disgusting is the FACT Acklin was made aware of a problem in 2006-2007 and again in 2008 that was worthy of dismissal if the teacher was to do anything similar again.  That in itself means Acklin gave the teacher a second chance.  Even more disgusting is the fact a child was sexually abused and instead of contacting the police for a proper investigation he instructed the teacher to remove students from his Myspace account.

The idea that an Editorial would be written asking people to vote for Acklin without reading all the court records to get to the truth is what is disgusting.

“Jamison was charged with Criminal Sexual Assault of minor female students at St. Joseph-Ogden High School as a result of incidents that occurred in 2003 and 2006”  (See Page 9 of the court records)
.
The record points to not just one student being sexually assaulted but at least two.  Acklin touts his leadership ability and the paper runs to his defense and talks about how great he is.  How does sexual assault of minor students go on for three years in your school and you don’t know anything about it?
.
“During the 2006-2007 school year, JANE DOE-3 and JANE DOE-4 informed a St. Joseph-Ogden High School teacher Mrs Rein, of the following acts of sexual harassment and/or sexual grooming and/or sexual abuse by Jamison against Jane Doe-2” (See page 6 of the court record)

.
Look at how many times sexual abuse claims were reported in this case!

The records reflect there was at least three separate people reporting sexual abuse by Jamison between 2006 and 2008, yet Acklin claims he acted immediately…………..once he was notified Jamison was going to be charged in 20012.  Where was his leadership with three complaints against the same teacher in a two year period?

Acklin can tout his leadership claims all he wants, but the fact remains, leaders don’t overlook three separate complaints of sexual abuse of a student by the same teacher without contacting professional law enforcement to investigate the alleged crime.

Anytime an alleged crime is reported, it is not the school administration’s duty to investigate such criminal complaints.  It is their duty to contact the proper authorities and let them do what they do best, investigate crimes.

Acklin’s actions in this clearly point to a failure of protecting the best interests of the students.  He was aware of potential criminal acts and he chose to keep it in-house and play investigator instead of turning it over to the authorities.

That is not the leadership we need fixing this broken state! 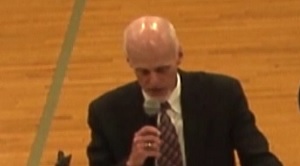