During “National Sunshine Week” in which virtually every organization (and good public official) across the nation, who publish information about government is screaming for more transparency and Freedom of Information Act reforms to enhance access to public records, the Prairie Press publishes a letter from an Edgar County Board member asking people to let their elected officials know their stance on legislation that gives “radicals” like us access to public records and the ability to do something about it when records are hidden from the public.

He wants you to support a more secret government similar to the old USSR.

He wants you to tell your legislators to end the public’s right to know.

We , ECWd, have always had an agenda, and it is easily found on our website:

“Our purpose is to foster accountability, truth, and transparency in our local governing bodies.” 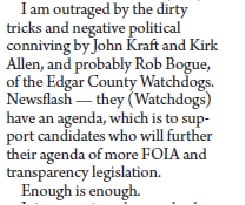 He is apparently upset with this (State Rep Candidates Jim Acklin and Randy Peterson would impose FOIA fee to access public documents) TRUE article we published about State Rep candidates Acklin and Peterson saying they would support fees to access public records. We even included the video of them saying it in their own words.

Heltsley, arguably the most ignorant county board member in Edgar County history, actually wants to do anything he pleases with no accountability.

Rest assured we will keep pushing to expose fools like Mike Heltsley, the self-proclaimed “good-ole-boy”,  every chance we get.

In a few short days we will have welcomed over half a million readers, in less than three months, to our website since January 1st of this year. Last year far exceeded one million readers – this year may double that, proving to us that people want to stay informed about their local government and public officials.

What we have been trying to figure out is why a so-called newspaper would advocate for more government secrecy by publishing his letter.