Resignations received by the Village were:

All of the Planning Commission members resigned either for "family or health reasons", according to their resignation letters emailed to the Village Mayor David Seaman.

The public first became aware of the Buckeye Hope Community Foundation's scheme to slip the low income housing into Tinley Park in late January 2016. The first Board meeting where the public appeared to criticize the Village and Planning Commission was on 2/2/16. The resignations started at that point, and really picked up speed after the Village Planning Commission held its meeting on 2/4/16 and the Commission members heard an earful in person that night.

Read our previous articles here. You can watch an ongoing real time documentary of these Village meetings here, as the citizens of Tinley Park forcefully called for an independent investigation into what Village employees and the Planning Commission had been doing that created this mess with Buckeye.

It is interesting to wonder why 7 Planning Commission members all had the sudden urge to resign just as the public became aware of the Buckeye housing project mess and questions started being asked. Since none of them said they are resigning in protest because of the way that the Commission had been running (and instead told stories about needing to spend time with family or having health problems), many in Tinley Park looking at this sudden explosion of resignations can't help but speculate that these Commission Members didn't want to face another public meeting where they would be grilled by the public.

It is a rare occurrence, even in Illinois, for almost the entire membership of a Commission to resign almost all at once like this.

Check back for further developments from Tinley Park. 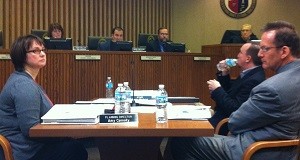