Gym owner admits to coworker he lied; testimony about audiotape given –

COLES CO. – The preliminary hearing held in October for a local gym coach was a startling one, according to the reactions of those in the courtroom hearing the testimony for the first time.
Zac Lawson, the 33-year-old former coach and owner of Sun Elite Gymnastics and Tumbling in Charleston, stands charged with a single count of Unauthorized Videotaping.
That count was the basis of testimony elicited by the Illinois State Police trooper who investigated the case, as given on Monday, October 19, at Lawson’s preliminary hearing, which he likely should have waived…since there was so much more coming out in the testimony than even that with which Lawson has been charged.
On September 4, a single charge was filed by Coles County prosecutor Brian Bower  – that of the unauthorized videotaping, wherein it’s alleged that Lawson placed a video recording device or transmitter in a restroom at the gym facility, which is located on North Loxa Road near Charleston, and actually made a recording which was subsequently transmitted. To where, or to whom, has not been made public.
The device was discovered earlier this year (March 23) and the discovery shut down the gym temporarily while ISP agents swept the 14,000-square foot building to make sure that the one they’d been tipped on was the ONLY one, which apparently it was.
However, at the time of the filing and of Lawson turning himself in on the warrant September 8, Bower seemed to be quick to point out that there was “no evidence that there was any sexual component” in regards to the device nor any transmission of whatever it might have recorded. However, he did initially allude to the fact that SOMETHING was captured on the recording.
Lawson’s HSCA
Upon publication of the gym’s temporary shut-down March 24, Lawson had a high-speed comeapart and contacted area media outlets, including television in Champaign, insistent that Disclosure’s online coverage was inaccurate and that not only had his gym not been shut down and locked (an act ISP had taken to ensure no one else connected with the facility could gain access while the physical investigation was going on), but that there was no suspicion of a recording device on the premises, something Disclosure had been assured was the situation, this by sources close to the case.
According to testimony on Oct. 19, however, there was more to it than just the recording/transmission device.
At that time, the court was told during the hearing set to present enough evidence on the charge that it would bind Lawson over for trial, that Lawson’s phone had also been confiscated on the day the gym was shut and locked.
On that phone, ISP testified, was communication between Lawson and many of his students at the gym. And while none of the communication was sexual or even suggestive in nature, the very fact that he was texting his underage charges – and at 2 and 3 in the morning, no less – could most assuredly be considered inappropriate.
However, it was what ISP testified was found on the phone in between the texts that was the most disturbing.
With Lawson’s wife sitting present in the courtroom in Charleston, the trooper explained that the agency had discovered, in between the text messages, evidence that Lawson had been viewing pornography that purported to show “young teen girls” in hardcore sex acts.
Whether or not this was porn that used actual underage girls (which is routinely produced and distributed out of Denmark, Russia, and other locales in Europe and Asia, all a part of the international sex slave trade) was not discussed.
Devastated
Lawson’s wife was reported as “devastated” at this testimony (apparently she hadn’t been apprised of this aspect of the investigation, by her husband or anyone else) and his attorney Jay Ferguson was reported as “outraged,” as apparently he wasn’t fully aware of what the ISP investigation had turned up, either.
Ferguson, as a matter of fact, was throughout the hearing attempting to say that a witness by the name of “Trey” (possibly a student/former student at the gym, reportedly someone who is helping keep the facility going at the present time) was actually the one who had “set up” Lawson, and had been the one who had set the recording device in place.
ISP testimony, however, elicited that this person, Trey, had been the one to whom Lawson had, during a recorded phone conversation, admitted that he (Lawson) had placed the recording device in the bathroom. According to information elicited at hearing, Trey had caught Lawson in a series of lies that ISP was easily able to disprove.
The judge laughed at the suggested that Trey was wholly responsible for Lawson’s alleged acts; then bound Lawson over for trial.
There has been no official indication that any further charges might be filed against Lawson. However, sources close to the investigation have advised Disclosure that the ISP examination of the recording device has not been concluded yet. More detailed information emerging about that device and what it allegedly contained, as well as the alleged pornography on the confiscated phone, might very well lead to more charges.
Lawson has entered a not guilty plea, and the case is moving forward. A status hearing on the charge had been set for November 23 in front of Judge Teresa K. Righter.
This story, and more available at DisclosureNewsOnline.com (HERE) Subscription 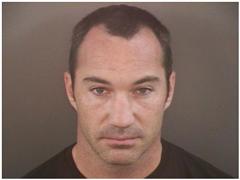