College of DuPage Trustees violated the law, spent nights at the Inn At Waters Edge –

DuPage Co. (ECWd) -
"Members of the board shall serve without compensation but shall be reimbursed for their reasonable expenses incurred in connection with their service as members. Compensation, for purposes of this Section, means any salary or other benefits not expressly authorized by this Act to be provided or paid to, for or on behalf of members of the board."

Is there anyone that does not understand what that means?

A recent FOIA request for receipts for use of an expense account for purchases made at the Waterleaf, and Inn At the Waters Edge, turned up a rather disgusting set of invoices for two current and one former COD trustee.
Under what authority did Dianne McGuire think she could stay at the Inn at the Waters Edge and have it paid for by COD?  Is that not compensation as defined in the statute?  Clearly a hotel stay is not part of her duties as a trustee, especially one so close to home.
The same goes for Joe Wozniak, who also stayed at the Inn at the Waters Edge on the backs of the tax payer.
And as if anyone is surprised, Dave Carlin, the current congressional staffer who is colluding with Dianne McGuire to stifle reforms at COD has also enjoyed his hotel stays at COD on the backs of the taxpayer.  For a guy that claimed to support efforts to conduct forensic audits of state programs to identify waste and fraud, I guess he was unable to apply those political talking points to his own position at COD.
Although it was only one night for McGuire and Wozniak, Carlin must have felt empowered as he stayed two separate times.
Is it out of line to demand McGuire and Wozniak immediately resign for violating the law?  Is there any reason they should not be forced to reimburse the tax payers of District 502?  Is it out of line for all of them to be prosecuted for receiving compensation in direct violation of the law? 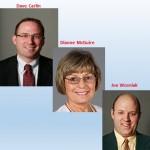