Village of Lerna tried to ban video cameras at their meeting –

Lerna, IL. (ECWd) -
Edited with the video at bottom of article...
The Lerna Village Trustee Meeting was held on October 6, 2015.
From the start, even before entering the building, one of the Village elected officials told me if I recorded audio, took any pictures, or recorded video, that he throw me out of the meeting, and if I didn't leave when asked he would have me arrested.
I stayed the entire meeting while recording video and audio on two separate devices.
About 3 1/2 minutes into the meeting, the acting board president stated that he noticed I was recording and recording was allowed, that the village had the power to say what was done with the recording after I recorded it, and since I was going to post it on youtube he told me to turn the camera off.
That did not happen.
Then the person that threatened me outside the building if I recorded anything at the meeting tried to tell me to leave the room.
That did not happen.
The village board eventually gave up their losing cause and proceeded with the meeting.
A citizen did say he would call the sheriff department, and I gave him the phone number, but he never called.
The learning experience these local public officials should take away from this is:
Any person has the statutory right to record audio, record video, and take pictures, at every open public meeting. The only rules a public body can place on that right is to designate a particular place for setting up cameras, and it must be a REASONABLE rule. If handheld devices (cell phone, etc) are used, those placement rules do not apply. The eavesdropping law specifically exempts recording at open public meetings - meaning no permission or notification required. Record at your leisure at an open public meeting.
Other "useful" statement I heard that night: "This meeting is only an open meeting to the village residents" and "the State's Attorney told us we could make you shut the camera off" and "I'll call the sheriff department" ...the night was filled with comedy!
Video of this exchange of ideas will be added to this article when I can finally get it uploaded.

In the meantime...he wanted to stand in front of camera: 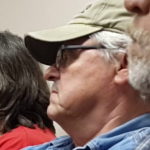 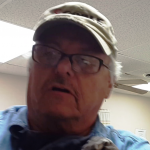