DeKalb, Co., IL. (ECWd) -
When Governor Rauner appointed Mr. Tim Struthers (President of First National Bank, Illinois) to the Northern Illinois University Board of Trustees, we were initially quite surprised. Mr. Struthers has multiple conflicts of interest that should have prevented him from being installed as an NIU Trustee.
Struthers presently serves on the DeKalb County Sanitary District, The NIU Foundation Board, and holds over five million dollars of NIU money on a daily basis in his bank. If the past informs the future, we should look closely at an incident in recent history where Mr. Struthers leveraged his banks relationship with NIU, the City of DeKalb, and the NIU Foundation.
In 2011, Dr. Bill Nicklas (ex-City Manager of Sycamore Illinois, ex -VP Castle bank and ex-City Manager of DeKalb Illinois) was hired as a Vice-President of Administration and Finance. It also turns out that Tim Struthers' late sister  was Bill Nicklas's wife. This is important when we take in account the College-Town Partners, LLC scheme proposed by Mr. Struthers and Dr. Nicklas.
In 2012, Bill Nicklas, Steve Irving, and Tim Struthers proposed to the City of DeKalb an initiative called “DeKalb 2020 a Prospectus”. The cover page says that this is a collaborative between the City of Dekalb and the NIU Foundation. This is the same NIU Foundation that Tim Struthers is on the Board of. A brief description of of the the Dekalb 2020, LLC is in the following:
The City of DeKalb has had a three year relationship with an entity called DeKalb 2020, LLC. This company's papers were filed in October 27, 2012 with the State of Illinois. The Company's agent is Keith L. Foster and its manager is Stephen P. Irving of Irving Construction, Inc. According to an e-mail by Bill Nicklas from NIU (obtained by FOIA) quote “the City of DeKalb tasked its planning staff to consider new uses for this provisional project area which contains about 40 lots”.
Three days later, a presentation was made by the City development staff called “DeKalb 2020 A Prospectus”. This plan was used as a starting point for the “City Center Plan”  adopted by the City of DeKalb July 08, 2013 and developed by SAA Design Group, Inc. In page 13 of “Dekalb 2020 A Prospectus” the city development staff planned to guarantee a sufficient number of residents by removing rental space city wide - “ The success of the housing component of the mixed use project would partly benefit from the removal of perhaps 100-200 bedrooms of apartment and rooming house occupancy in the neighborhood. Other strategies to reduce student rentals elsewhere in the City or on the University campus may be considered as part of a comprehensive strategy.” DeKalb 2020 was used to run a meeting (Charette) on October 29, 2013 to present some of the concepts from Wills Burke and Kelsey (Chuck Hanlon formerly of Land Vision Inc) along with Roger Hopkins. The study was paid by TIF funds, FNB Funds, and NIU Funds after a series of emails (City_FOIA003.pdf).
In the Fall of 2013, DeKalb 2020 became College-Town Partners and was pushed to use a different formula by the University Administration (President Douglas D. Baker ) and assigned to Ron Walters. So Tim Struthers started to push the College-Town Partners Agreement which was outlined in a previous article. Struthers pushed this concept well into the Fall of 2014 and well pass the time where the City and the University had publicly claimed this idea was no longer being pursued (nicklas_calendar).
It is also clear that Mr. Struthers and Mr. Nicklas spent a significant amount of time on this project. Both the City and University then tried to include the area the in an Enterprise Zone Application and the neighborhood pushed that effort back. It is clear that Mr. Tim Struthers doesn't seem to understand what a serious conflict is.
In the following E-mail, Mr Struthers is the major player and pushing his brother-in-law/friend: 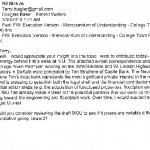 Tim Struthers employer's bank is pushing the University and their consultant (Terry Foegler) to hurry up and form the legal shell. The University Counsel, Jerry Blakemore, should have put the brakes on this instead of watching passively.
Stay with us, we are still putting the pieces together...