Clark Co., IL. (ECWd) -
Kathy Ramsey and Summer Shaw had their first day in Court this morning in Clark County.
Kathy was first, with the Judge asking if she needed an attorney, and setting the next court date of October 29, at 2:30 p.m. She is being charged with a Class III Felony of Official Misconduct
Judge Shick stated that this charge could result in 2-5 years in Department of Corrections, one year supervised release, up to a $25,000 fine, probation or conditional discharge for up to 30 months, or 180 days in the County jail as part of that sentence or those sentences. If found guilty, restitution could also be ordered, along with forfeiture of office and loss of any pension.
Ramsey's Bond was set at $10,000 with "own recognizance" to apply. As a condition of her Bond, she was ordered to not act in any official manner relative to her position as Circuit Clerk, report to the Sheriff for Bond processing, turn in all things belonging to the County, keep out of the Circuit Clerk's Office, and turn in her keys to her office and to the Courthouse.
Summer Shaw's case was next, with Judge Shick appointing Public Defender McGrath as her counsel. She is charged with a Class IV Felony for "Theft by Deception"which carries a potential penalty of 1-3 years in the Department of Corrections, supervised release of one year, fine of up to $25,000, probation or conditional discharge up to 30 months, restitution, and/or 180 days in County jail.
He also set Bond at $10,000 with "own recognizance" to apply. Ordered her to the Sheriff Department for processing the Bond. Since she is not longer an employee of the Clark County Circuit Clerk's Office, no additional conditions were applied.
[gview file="https://edgarcountywatchdogs.com/wp-content/uploads/2015/10/kathy-ramsey-booking.pdf"]
[gview file="https://edgarcountywatchdogs.com/wp-content/uploads/2015/10/Transcript-RamseyFA100215.pdf"]
[gview file="https://edgarcountywatchdogs.com/wp-content/uploads/2015/10/summer-shaw-booking.pdf"]
[gview file="https://edgarcountywatchdogs.com/wp-content/uploads/2015/10/Transcript-ShawFA100215.pdf"] 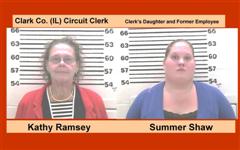