Paris, IL., (ECWd) –
Sam Roberts, Maintenance and Technology Director of Paris School District 95, decided to leave an offensive voicemail to a mother of three students, and a volunteer at the school…because he didn’t like something she posted on her personal Facebook page.
I attended the District 95 school board meeting this evening and voiced my opinion of this voicemail during public comment. It was kind of rough for me to get thru the entire comment, but I needed to have my voice heard.
This message is beyond offensive to the average person. It is pure retaliation for voicing an opinion on Facebook.
This message came after some parents were upset about the “Tiger” being painted over at the old High School football field-house, without any warning to the parents who wanted to have their children’s pictures taken in front of it for their senior year. It was sentimental to them and their children, and a general comment of “those ass-clowns” was made during the conversation – without mentioning any person’s name. For that, Sam thought it prudent to retaliate for the comment and take away public business from the commenter.
————————————–

My comments to the Board:

Good afternoon, I am here to talk about the First Amendment and Criminal Intimidation.

A person commits intimidation when, with intent to cause another to perform or to omit the performance of any act, he or she communicates to another, directly or indirectly by any means, a threat to perform without lawful authority any of the following acts:

Take action as a public official against anyone or anything, or withhold official action, or cause such action or withholding…

Intimidation is a Class 3 felony for which an offender may be sentenced to a term of imprisonment of not less than 2 years and not more than 10 years.

How can anyone who is the Maintenance Director of this school district think it is OK to use a telephone under the control of Mayo School and leave a threatening, abusive, offensive message? I will get to that message shortly.

From a Mayo School telephone:

“Hey Amy, this is Sam Roberts, the Ass-Clown. – I understand you are beatin up District 95 on facebook, I don’t quite understand all that Amy, um I called this morning and left you a message about picking up some metal at my shop – you can forget that…uhmm the can thing we had going, you can forget that, we’re done with that, uhm I really don’t appreciate you beatin up District 95…”

The audio recording really shows his offensive tone of voice, please listen to it.

With the “can thing”, Amy has been collecting the cans from the various school kitchens, recycling them, and bringing the cash back to the school for the school’s use. If you remember back a couple of years, for those of you that have been here that long, there was a discussion about the cans and the board agreed to have Amy do this “can thing”. How can taking that away be a public good? It is not, and I demand a public apology.

This is unforgivable, and if he does this to someone he has known for more than 30 years, how does he talk to people he doesn’t know, or who might be too scared to voice their opinions?

Audio of my comments to the board below (with parts trimmed where I had to stop):

If anyone has any other questionable voicemails, emails, etc I would appreciate receiving them. 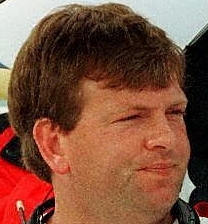 Old pic of Sam Roberts…if anyone has a newer picture please forward it to me.