Sherrard, IL. (ECWd) -
Some good news!
Sherrard CUSD-200 school board tonight approved a settlement for more than $95,000 due to the school refusing to allow an 8 year old girl and her service dog to attend classes.

"Service Dog Not Allowed in School"

"Service Dog Not Allowed in School" has been the headline of many news articles and not what the family ever envisioned when Kellsey received her service dog in January of 2014.  Jasper started attending Sherrard Elementary with 8 yr old Kellsey in January until less than 1 month later the family was told that Jasper could no longer attend.   "That dog has to be with my daughter all the time," says Kellsey's mother.  "She takes full care of Jasper, and Jasper takes care of her"
Kellsey was diagnosed with Epilepsy when she was only 20 months old.  Kellsey's parents haven't been able to sleep soundly ever since the horrific day they found her unresponsive and blue while taking a nap.  When the parents learned that a service dog might be able to help notify them of Kellsey's seizures they immediately applied and were on waiting lists for over 5 years.   Dreams finally came true after much hard work and commitment from trainers, Kellsey and the entire family.  Kellsey spent countless hours learning how to be an excellent handler to her furry angel Jasper.  After a trial week run at school back in January everyone was on board and everything in place for Kellsey and Jasper. 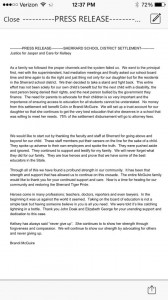 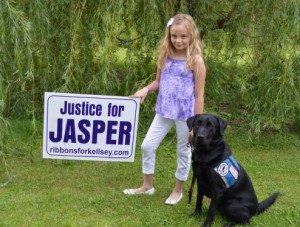