Lerna, IL. (ECWd) -
We have been receiving tips from Lerna residents for at least two years now, and decided there was enough information to attend a Lerna village trustee meeting.
In July of 2015 we attended the trustee meeting in Lerna, which is a village due south of the Coles County Regional Airport. During the meeting, we explained that the Mayor had an incurable conflict with his job as the Village of Lerna full-time maintenance supervisor. This is a conflict of interest and had been ongoing, admittedly, for years, possibly more than a decade.
Additionally, the Mayor had filed a false Statement of Economic Interest in which he failed to include his income from the village, where he made more than $1200 last year. I asked him to refile a correct SEI, but am unaware at this time if that was ever filed.
At the same meeting, a village trustee motioned and made the case to increase the maintenance supervisor's compensation by $200 per month - and then a subsequent vote to pay that same trustee for mowing grass on the repossessed properties AND have the village pay her to do that. I asked them to quit paying for that conflict of interest and either find another person to mow the yards or ask the trustee to resign. There is no other option.
Hearing nothing, we attended the August meeting to see if anything had, or was about to, change. Everyone was present except for the Mayor/Maintenance supervisor (who had a family emergency to take care of). The attorney did acknowledge that she agreed with the assessment of the conflicts of interest, and I noticed she had a blank Statement of Economic Interest with her.
There was no indication of what the mayor's intent would be, so we will be at the September meeting to find out. Sixty days is more than enough time to figure out you need to resign due to conflicts of interest.
It is entirely possible that nobody in the village knew there was a conflict since it has been ongoing for so long, but that does not excuse its continuing into the future. 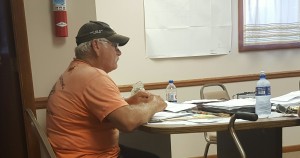