As if the $20 Million Dollar e-mail failure was not enough to rile up the voters and throw out the enablers at the College of DuPage, maybe new facts on the College of DuPage President’s use of public funds to pay for his private hunt club membership will kick the authorities into high gear towards prosecution of all involved.

Can anyone explain why on earth a President who earned $504,881.50 in 2014 would need the public to pay for his private hunt club membership?  I will focus this article on the membership and cover the massive pay exposure in another article.

For the last 9 months we have waited on the attorney general to act on the request for review pertaining to documents COD refused to turn over regarding the Max McGraw Wildlife Foundation membership that Breuder had COD paying for.  COD refused to give them up even though your tax dollars were used to pay for the membership.

Thomas Glaser, the Treasure of COD claimed numerous positions on this membership that included it was a “President’s Office” membership, not Breuders, it was part of his compensation package, and then that it “was” Breuder’s membership paid for by the College.  (Glaser fabrications to the press and public)

Then we have Ken Florey, former COD attorney as well as former COD Foundation member who recently resigned, telling the Attorney General that the membership was Breuder’s individually and not in his capacity as President.  (Florey Response to AG)

In an effort to bring the truth to the public on this matter, we continued to demand records to prove lies were being told.  We tried to make it simple by getting the W-2 for Breuder which would list all the benefits he received.  The courts refused to give us that public body created document – even though we still feel we have a right to it.  The fight for the truth continued.

Today, ten days past the promised due date, we have the records to once again support our position that Dr. Breuder used public funds for his private hunt club membership, which is a misapplication of funds and is a felony offense if prosecuted and found guilty.

The request was simple: “Copy of all compensation for employment for Dr. Breuder from date of hire, January 1st 2009 to current date. I am not seeking his contract. I am seeking ALL compensation provided to him whether that be financial, benefits, memberships, etc. Any compensation in the form of financial I am asking for copies of those checks. If the compensation was benefits or memberships I am asking for all documentation pertaining to those benefits and/or memberships. I would appreciate these matters be broken down by year, as in 2009, 2010, 2011, 2012, 2013, and 2014 etc.”

COD has NO DOCUMENTATION of any kind to support Thomas Glaser’s statements that this private membership paid for by the taxpayers was part of Breuder’s compensation.  He lied to the press and to the public.

I contend the authorization of those private membership payments is a direct misapplication of funds, a felony, because there was ZERO evidence those expenditures were supported by one shred of documentation or authorization and the response from my FOIA request supports that position. In other words, it was not for a public purpose.

Had this membership been part of his compensation package as claimed it would have to be supported by evidence and the documents provided make no reference, not even an insinuation, that a private membership to any club, let alone a high dollar hunt club, was ever a perk for the President in any capacity.

May I suggest that the authorities now ask the IRS to get involved and determine if Breuder reported this private hunt club membership as compensation paid for by the taxpayers.  Such a payment would constitute a taxable benefit.  If not, then add tax evasion onto the laundry list of wrongdoing.

If tax evasion was good enough to bring down Al Capone then Breuder should be honored with the same treatment. 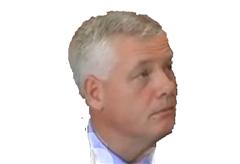