When a law enforcement entity breaks the law, who can the people turn to for accountability?  As referenced in this article, Edgar County was plagued with illegal gun sales and to date totally ignored by that State’s Attorney, Mark Isaf.

Mr. Bower,
In my investigative journalist work over the last 6 months I have obtained records through FOIA that support clear felony acts of Official Misconduct and violations of the Officers Prohibited acts, sec. 3 as well as violations of others specific statutes, by a public official in Coles County.

My question to you is who should such a complaint be filed with when the public official is part of the Coles County Sheriff’s office. It would be a clear conflict for the Sheriff’s office to investigate my findings so not sure if this needs turned over to you directly or to the Illinois State Police.

I await your direction.

“Mr. Allen
It is my opinion that the appropriate investigatory body would be the Illinois State Police. They would then submit the report to my office, or in certain circumstances to the Attorney General’s Office, for review and prosecution if appropriate. If I can be of assistance in connecting with the State Police please give me a call.
Brian Bower  217 348-0561″

Is there any confusion that Mr. Bower pointed me to the Illinois State Police to handle the investigation?

Over the next several months I provided factual evidence of crimes to the ISP as part of my official criminal complaint against Darrel Cox, former Coles County Sheriff .  Darrel Cox was involved in illegal activity to include illegal gun sales, which constitutes Official Misconduct and is a potential felony for starters.

Approximately late June of 2014, myself and former State Representative Halbrook had a meeting with ISP Lieutenant Greg Lindemulder in the Champaign office.  The Lt. confirmed we did a great job putting our complaint together and although some of the matters exceeded a statute of limitations, there were definitely serious violations of the law identified that could be prosecuted.

We were informed that although there are gun crimes identified, the ISP can’t move forward without direction from the State’s Attorney’s office who has informed them after they presented our evidence that he does not want anything pursued on the matter.  The State’s Attorney advised the ISP that he was going to instead issue a memo to the Sheriff to stop selling guns, a felony act.

I urge everyone to read the original complaint because selling guns was only part of the problem.  Regardless, the very person who sent me to the ISP in the first place didn’t want them investigating anything further.

While all this is going on, I continued to write articles and expose the truth regarding Darrel Cox and his illegal gun trafficking.  He was bold enough to go on TV and deny any wrong doing the day before the election, even though in the interview he admits to selling seized weapons! (Click here for WTHI TV reporting video in our article)

Cox was running for State Representative during this time.  I insinuate the “protecting their own” because we were told in late June or July of 2014 that the SA put out a memo ordering the illegal activity to stop.  In fact, the ISP told us that although the SA office is not going to do anything I should feel good about the fact Cox was given a serious wake up call on the matter, implying he got a pass on being charged with a crime and knows it.

Where this gets interesting is my conversation with the State’s Attorney after having already spoken with the ISP.  It was at a local political event in which he claimed the ISP never brought anything to him. That is a direct contradiction to what the ISP told myself and a sitting States Representative.  We now have the memo which he confirmed sending during our conversation.

Question: If the ISP didn’t meet with him as he claims, then how did they know about the memo? (Click here for copy of memo sent to multiple law enforcement offices)

Protecting their own?  How interesting to see the memo to cease felony crimes was NOT sent out until after the election!  A letter that proves we were right, contrary to many of the local supporters of Cox.  Had the letter been sent out before the election even more voters would have been informed regarding the illegal conduct of, at that time, their sitting Sheriff.   State’s Attorney acknowledges you can’t sell seized weapons and does nothing to those doing it, other than “request and suggest” that it cease.

Protecting their own?  Sadly, even after presenting the local news paper editor with all the information they refused to run a single piece on the crimes being committed, in spite of overwhelming evidence.  Nor would they run any story on the memo issued by the State’s Attorney after the election.

Protecting their own?  WTHI ran the news story linked here the night before the election.  The day of the election, by 11 am, the entire news story was pulled from the web site.  We have been told because of massive backlash from local supporters of gun running Darrel Cox.  To date the news story and video cannot be found on their web site.

Protecting their own? WTHI has refused to run any follow-up pertaining to the memo issued from the State’s Attorney, even though the low level reporter felt it needs to be shared. Clearly, someone up the food chain does not want the information exposed.

Where is a person to turn when a State’s Attorney’s can selectively ignore felony crimes being committed by the top law enforcement person in the county, the Sheriff?

Think this is an isolated problem?  It is not!

Both Edgar County and Coles County State’s Attorney’s have ignored illegal gun crimes committed by Sheriffs in their respective county.  If that is not protecting their own I don’t know what is.

If you have any doubt that the local media is failing you, simply click through and read the facts presented on these types of crimes.  I provided some links below to get you started.

I believe we have come to a point in our state that we truly need an independent task force of investigators and prosecutors to take on local government corruption as we see here. A task force that can take these cases right out from under the State’s Attorney because it is clear they are not going to upset their political apple cart and charge one of their own. 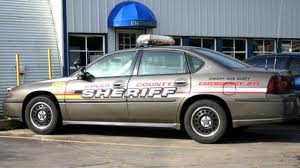