PRESS RELEASE:  FOR IMMEDIATE RELEASE
.
At an Illinois House Republican press conference this morning, Rep. Peter Breen (R-Lombard) announced legislation to create the “Breuder Rule” to ban future excessive severance agreements, like the $763,000 agreement awarded to College of DuPage President Robert Breuder last week. Breen’s legislation would also forbid community college boards from raising property taxes, tuition, or fees for the same number of years as any excessive payout they award under current severance agreements, defined as anything over one year’s salary and benefits. Breen’s 48th House District includes the College of DuPage (“COD”) and surrounding communities.
.
“Instead of naming a building after COD President Robert Breuder, we should name reform legislation after him,” said Breen. “Too many so-called ‘public servants’ are getting rich at the expense of the taxpayers, and the ‘Breuder Rule’ will prevent this going forward. For pre-existing agreements, while the General Assembly can’t cancel those agreements, we can protect taxpayers and students from having their taxes and tuition increased to cover these abusive payouts.”
.
Breen addressed the Board members publicly at their meeting this past Wednesday, strongly condemning the Board majority’s actions over the past year, from inaction in the face of numerous spending irregularities, to their ill-conceived and improper censure of Trustee Kathy Hamilton, the lone reformer on the COD Board, and most recently to their approval of the massive severance package for Breuder.
.
While Breen focused on fiscal issues at today’s press conference, his legislative agenda for reform also includes bringing full transparency to COD, along the lines of what Breen accomplished in the Village of Lombard, requiring all financial information to be posted online. Breen will also introduce legislation forbidding selling naming rights to buildings in an employee’s severance agreement.
.
Peter Breen is a first-term Illinois state representative and former Trustee and Acting President of the Village of Lombard. His 48th District includes portions of Glen Ellyn, Lombard, Wheaton, Lisle, Downers Grove, Oak Brook, Oakbrook Terrace, and Villa Park. Residents of the district can reach Rep. Breen via phone at 630-403-8135 or online at www.reppeterbreen.org.
. 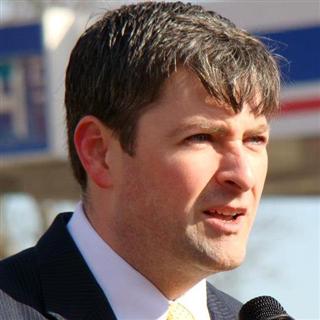