Lariat Advance: That is a term not too many young folks will know now-days.

I learned that word on my first three year tour in West Germany in the mid 1980s. I spent three years there, expecting the “commies” to come rushing across the border at any time.

I was stationed with Delta Company, 10th Combat Engineer Battalion, and at that time it was in Kitzingen, West Germany on the hilltop named Larson Barracks.

The “Cold War”, not because of the temperature, but for the standoff between the East and the West.

There were many times where we heard those words to be suddenly faced with living in pup-tents, with no heat, and not knowing how long you would be out. If memory serves me, it was generally somewhere between 10 hours and 3 days, depending on how things went. I remember the first time I had the privilege of riding “shotgun” in the tractor trailer that hauled the bulldozers around. It had a heater! – almost unheard of at the time with military wheeled vehicles. I made it my mission to learn to drive it, and it did not take very long until I was in charge of my own tractor trailer, bulldozer combination. I was no longer pushed into the back of a cargo truck on field training exercises. Life was good. A truck that was heated and dry – couldn’t have asked for anything more.

I participated in two REFORGERs, or Return of Forces to Germany, while in the 10th Engr Bn – and 1 REFORGER after the wall came down while stationed with the 26th Area Support Group, Engineer Platoon. These were nearly a month long, and we were all over southern Germany for maybe 2 or 3 nights in one place. There were several other training exercises to Hohenfels, and Grafenwoehr during this three your tour, and one exercise held during a record setting arctic blast. It was so cold we could not even leave our GP Medium tents, none of the vehicles would start, and we were mixing 1/2 mogas with 1/2 diesel to burn in the pot-belly stoves to keep us from freezing.

We also did several construction projects around West Germany since we had earth moving equipment. We built two soccer fields, a tennis court, and several parking lots for small German communities. This was two-fold: to give us training on the equipment, and to assist small communities while enhancing relations between the US Army and those communities. We were always welcomed with open arms.

In 1986, the United States bombed Libya in response to the Berlin disco bombing, the unit I was with was sent down to Garmisch, West Germany to help guard the military installation down there. We worked 1 day on and got 3 days off with free ski lift passes. I learned how to snow ski on the Zugspitze, in Germany.

Anyway, enough of the reminiscing…

The reason for this article, in case you haven’t realized it yet, is that November 9, 2014 will be the 25th anniversary of the fall of the Berlin Wall, and the demise of most of the eastern block. No longer was there to be an East and West Germany, or an East and West Berlin. Long gone are the mumblings of “Lariat Advance” – the code word to pack your stuff and get on the move.

It is important to remember events such as this so as not to repeat the the past. Freedom is fragile, and most certainly can be taken one small step at a time. Taken one small step to ensure people are not aware their freedoms are gone until it is too late.

In honor of this event that helped shape the World as it is today, I leave a few short videos for you to enjoy:

.
Apparently, an East German party leader erred in telling people during a press conference that they would allow people to cross into West Berlin that evening. More than 10,000 people showed up at the border crossing and the guards had no choice but to let them through.

.
AND – although this has nothing to do with the fall of the wall: Roger Waters’ live concert in Berlin the following year. 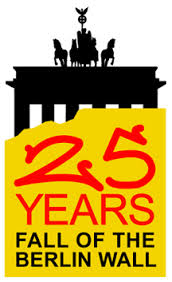