John Weimar uses the police emergency system to make a false call to the Orland Park Police Department. This is nothing more than using the police as a weapon against law abiding citizens in order to "develop" a false police history to presumably be used at a later date to intimidate and harass people for speaking out during public meetings.  He plays on the fact that his wife is the Director of the Orland Park Public Library, the same library that allows unfettered access to child pornography and unreported sex acts in the library.

So, his "emergency" is that people are exercising their first amendment rights to distribute political flyers in the neighborhood where he happens to live. He tells the PD that his "emergency" is because someone is parked a little too close to the sidewalk and on the sidewalk, and he wants them issued a couple tickets. What they should have done was to issue him a citation for calling police and lying to them about where a vehicle was parked.

"Parked right up on the sidewalk" - I have to wonder why he can lie and get by with it.

John Weimar is an attorney that also is the administrative judge for Alsip and Hometown, Illinois and possibly a prosecutor for Alsip, IL. We are still working through his employment that doesn't seem to last very long at any one municipality because of all of the complaints lodged against him and his attitude towards taxpayers.

Attorney John Weimar is also the same jerk that used a fake badge to intimidate law abiding citizens and insinuated he had some type of police authority by flashing that badge around. He is truly out of control and is quickly becoming a liability and insurance risk to any municipality that chooses to contract with his firm.

From the victim of John Weimar's lies:

Here is the 911 call made by John "Jack" Weimar to the Orland Park Police Department on 7/22/14 where he told lies to get a patrol car out to harass two people who were distributing political flyers in his neighborhood that he did not like. Weimar turns out to be the wife of Mary Weimar, the Director of the Orland Park Public Library. In the 911 call, he lies to police and says a vehicle is parked on the sidewalk. This is not true. The vehicle was parked properly and Weimar was only saying this to get the police on the scene, as a ruse. Weimar also demands that tickets be issued for handing out political flyers, which is against the basic constitutional rights we all have to express ourselves politically by walking neighborhoods and handing out flyers. Because Weimar did not like the flyers that were being handed out, he decided to use the police as a weapon against people he didn't like. And, of course, after the police call he used a badge that he's not supposed to have (with the name of Alsip, Illinois on it) to give the people he was harassing the impression that he is a police officer. He's not. He's just an attorney who freelances as a contractor for various local governments in the Chicago suburbs who thinks he is connected enough to get away with behavior like this. We'll see. 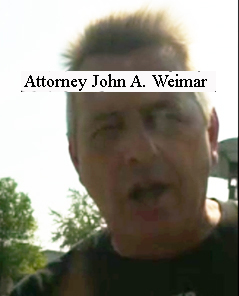