Diane Jennings, Orland Park Public Library Trustee, Licensed Attorney, and sister of Bill Jennings the filthy facebook poster, went on a tyrade that any clinically insane liar would be proud of. You would think any person of sound mind would know the video that has already been posted contradicts almost all of what she says in her ranting.

I will point out the lies and you can watch the video below:
.

She claims the library and the board are under attack – failing to realize that is the right and duty of citizens to address their grievances to their elected officials that are supposed to work FOR them, not AGAINST them – without those elected officials trying to establish a police record on those same citizens.

She claims their home phone numbers and home addresses have been published on the internet – that is TRUE! What she does not mention, and constitutes a lie, is that she is implying the citizen protesters published them on the internet (which I admit posting it after finding it on IARDC’s website) when the real truth is that the Illinois Attorney Registration and Disciplinary Commission of the Supreme Court of Illinois (IARDC) (click here)  is the place that has their home phone number and address posted to the internet. When they practice law out of a home office that is what gets published. Try it, search for Diane Jennings at the IARDC link provided…

She goes on to imply that since we are “not from there” we should not have anything to say – which is completely wrong since our tax money goes to support them through state and federal taxes.

She claims pornographic materials have been emailed (from the citizen protesters) to the employees on their work computers, but cannot and will not provide proof of that – constituting a lie, slandering the good names of the individuals and groups opposing unfettered access to child pornography in the library.

Two employees have been singled out for vicious attacks? Another LIE – since when is telling the truth a vicious attack? The vicious attacks have been the part of these employees contacting the police and filing false police reports…here is an example of one of those false police reports: An employee called to report that they were concerned about a troubling folk song that Megan Fox had recorded in which it mentioned a “Smith and Wesson” – they failed to tell the police it was written three years prior and for a tea party second amendment event, and in no way was threatening to do anything – but a report was filed to “build a record” against the citizens that do not agree with library policy. What is more vicious? Speaking at public meetings, or using the police force against private citizens that disagree with you?

The May 19th meeting Diane Jennings says they asked Bridget to call the police. That is a lie and you can see it on the video from that meeting…unless…that was what they talked about in the illegal meeting before the meeting in the locked room adjacent to the meeting room. If that is the case, then Jennings just admitted to the illegal meeting – something they have in the past claimed did not happen even though we have pictures. This meeting was a deliberate set-up, the chairman called for a recess to the meeting but does not have the authority to recess it  without a vote of the trustees – no trustee vote was taken.

Serious enough for disorderly conduct? Another lie. Nothing happened that night and it wasn’t until the next day when Bridget Bittman signed the ordinance violation citation in a further attempt at using the police against citizens, people that Jennings calls protesters instead of citizens.

She then talks about the event at the civic center where Bittman accosted Kevin DuJan and I, and Jennings spewed her gays slurs and vulgar language. She starts by saying “As we entered the civic center we encountered three individuals” LIE ! They didn’t “encounter” us until they were LEAVING the civic center.

Now she really gets creative – talking about approaching this “blockade” like it was a military maneuver or something. Anyway, Bittman went out of her way to accost us, not using the most direct route to her vehicle, and Jennings doubled back to use vulgar language and gay slurs. She lies again about what Bittman did, and lies again about me “yelling at them”. Keep in mind that Bittman never says anything about moving out of her way or that the sidewalk is blocked and she wishes to pass, all she says is “Can I help you?” like Kevin was there asking for help or something. Bridget did say “this fruit is blocking the sidewalk” right before she went to the car. I had stated to her that “you can walk around him”. Jennings also lies about the “third time” I “bellowed” at her, which is another lie. I told Bittman she could get out of there, and then when Jennings asked me to repeat it I state that she could get the hell out of there too. This all happened AFTER Bittman accosted Kevin. She leaves out the part where she called me an a-hole a total of FOUR times, acting like they just left without saying anything. She also LIES by not including the part where she said all the gay slurs and even admitted to it on the police report!

Jennings continues lying by saying that we told the police that Bridget came at us with a weapon in her hand shouting anti-gay slurs. That is a lie and is nowhere on the police reports. This was more made-up information on Jennings part to garner sympathy by lying to the people at the meeting. Jennings then says “that did not happen”, which is correct and nobody EVER said it happened and it is nowhere in the police report that anyone said that it happened. More of Jennings LIES trying to paint the picture that we were lying to the police like they have done at least 10 times.

Jennings continues lying about the audio for the video being erased and denied flipping me off – EVEN THOUGH she admitted to it on the police report. Does she think people will not read the police report?

Proof of this is included in at the end of the video above. Why did Diane Jennings lie? Do they teach that in Law School? If you get caught, even if it’s on video, lie about it?
. 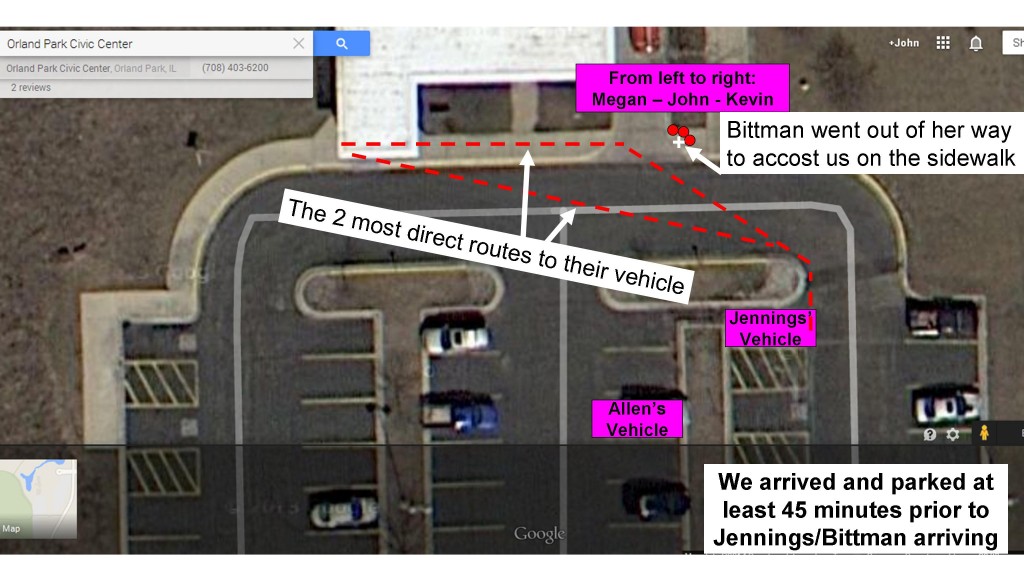