While conducting our usual research, we came across some information that I believe points to Alderman Beverly Church being ineligible for office – or filing false property tax exemptions in order to obtain financial gain. I say “believe” because it is really either one or the other; either a false tax exemption form or she has removed her place of residence and is not eligible for office.

First to the most basic qualifications for the office of Alderman:

1) Be a voter, and, 2) Live within the boundaries of whatever position you are running for, and, 3) Don’t be arrears in payment of taxes or a debt to the municipality.

Not too hard for most, but others seem to think these laws are optional and try to figure out ways in which to avoid their legal requirements. One situation in which an office becomes vacant is by the “more than temporary removal of place of residence from the municipality/ward/etc“. So now we need to determine the effect of filing public records signed under penalty of perjury stating your primary residence is located outside your municipality.

This PTAX-329 (link to statute) is a form used reduce property taxes for senior citizens. There are several requirements to qualify for this exemption. One of the primary requirements is to have, on January 1st of the tax year, lived in the home as your principal residence.

"...is granted for property that is occupied as a residence by a person 65 years of age or older who is liable for paying real estate taxes on the property and is an owner of record of the property or has a legal or equitable interest therein as evidenced by a written instrument, except for a leasehold interest, other than a leasehold interest of land on which a single family residence is located, which is occupied as a residence by a person 65 years or older who has an ownership interest therein, legal, equitable or as a lessee, and on which he or she is liable for the payment of property taxes."

On this form, and signed under penalty of perjury, is the affirmation that this property, located outside the Marshall city limits, was her principal residence and also that she had this same exemption the prior year.  Now you have to remember that perjury is a crime in Illinois, and tax fraud is also a crime.

This form was submitted in order to reduce her tax liability thereby becoming unjustly enriched through a fraudulent tax exemption…OR she actually did have this as her PRIMARY RESIDENCE during the time-frames she signed her name attesting as fact. In that case, she is simply not qualified for office and her Alderman seat is vacant.

You can see all of the related documents obtained through Freedom of Information Act requests (FOIA) in the below letter that I submitted to Mayor Sanders asking him to either ask Mrs. Church to resign or to ask the city council to declare her seat vacant by her not living within the municipality of Marshall at some time during her current term of office.

During the Marshall City Council Special Meeting held tonight, August 19, 2014, I talked about all of this during public comment session. Mrs. Church’s husband also commented stating among other things that the form I quoted said “Indiana” on it. So was he saying that her primary residence was in Indiana, making her an Indiana resident? I don’t think so, I think it was an attempt at denying she signed the tax form.

If you look at the ILLINOIS PTAX-329 that she signed (above), it does say “Marshall, IN. 62441”. This is what the Clark County Assessor uses for certifications and since the city, zip, property tax ID number, address, and GIS map printout all point to the property in Illinois – you and I all know this was for Illinois property and she signed the form and took the tax exemption.

Add to that the fact that her husband signed the original form (below PTAX-324) in 2011, and it does have the “Marshall, IL. 62441” listed, which is verification that everyone involved knows what property is being exempted. They also know she is currently an Alderman in Marshall and required to have her primary residence within the municipal and ward limits. 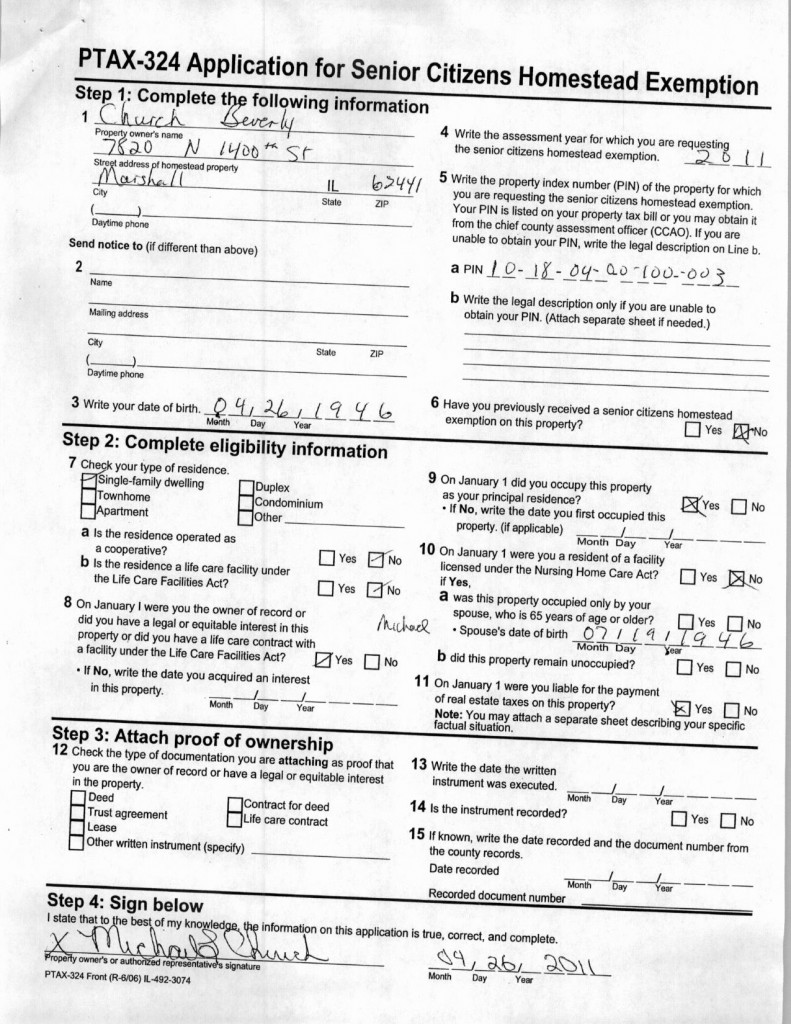 There are really only two options here:

1. She is an Alderman living within her ward and the city – thereby filing false documents signed under penalty of perjury to obtain a financial advantage.

OR
2.  She lives at the address listed on the Property Tax Exemption form – thereby being ineligible to hold the seat as Alderman.