We kind of expected this to surface, since we know that most local newspapers are beholden to their advertisers in one way or another. Most often they either report inaccurate articles or refuse to report on things that might make their advertisers, or in this case, part owners, look bad – no matter what the truth is.

This appears to be more of the same…so let’s start from the beginning of his “Editorial” that appeared in the July 15th edition of the Marshal Advocate.

Without Compensation? Don’t make me laugh!

First he talks about how he used to be on the board and that they served “without compensation”, leaving out the obvious compensation of free boat passes, reported free pontoon use, and in some cases free personal watercraft passes. WITHOUT COMPENSATION means receiving nothing, including favors or anything else, for your service.

Shortly after, he contradicts his first statement by claiming that “despite the accusations”, when he came on the board in 2007 the free boat passes were stopped. What this tells me is that board members were receiving compensation, or it would not have been stopped (if it was ever stopped).

Additionally, this is written in an attempt at casting doubt as to whether our statements that Ron Stone and others were currently receiving free boat passes was false. I can tell you it is true, they were still receiving free boat passes at least up until a couple weeks ago – which should tell you that what Strohm thinks he stopped in 2007 was never actually stopped.

Proof, by way of their own paperwork, of these illegal “perks” is in this article (click here). Lots of quality research  there Strohm…

EDIT: We now have evidence that the illegal perks did not stop and as a matter of fact INCREASED while Gary Strohm was a Park District Commissioner! That article will be published tomorrow. Oh, it’s nice how he described it as a “credit” instead of the compensation that is was.

Blaming it on the Director

Next, in true fashion of someone trying to cast a bad light on an employee like a child caught stealing candy, Strohm places the blame for the “Public Comment” agenda item missing from the agenda onto the back of the Executive Director. Such sloppy fact checking will not earn awards. Makes me wonder if the other owner of the newspaper wrote this paragraph.

The fact is, Mr. Terry Stepp, Chairman of the Clark County Park District board sent the exact wording for the agenda to the Director (like he does for every meeting) and asked her to post it on the website. The failing of including “public session” on the agenda lies with Terry Stepp and no one else. You have to stoop pretty low to blame your “mistake”, if that is what it is, on one of your employees.

Mr. Strohm, FOIA requests are easy, and can prove or disprove your story.

A copy of this email obtained thru a FOIA request is located below.

Attempts at minimizing what actually happened, but call it a “simple mistake”, or “not with malicious intent”, or calling it “ridiculous” is a failure on its face for several reasons. 1) There is no state of mind requirement to committing this crime of violating the Open Meetings Act, and, 2) You cannot quickly gain back the loss of public trust that occurred that night by the board’s refusal to allow public comment, and, 3) It is widely viewed as a strong-arm tactic by the board because there were so many people in attendance that night, and, 4) The board was asked to allow comment, informed they were violating the act, and they made a conscious decision to continue with the law breaking, and, 5) The citizen’s arrest statute authorized whatever means necessary, including physical force, to maintain custody until law enforcement personnel arrive.

The board was asked to voluntarily submit to custody and they did.

The bottom line here is that “simple mistakes” are corrected when they are pointed out.  Refusal to correct it was what elevated this above a simple mistake. 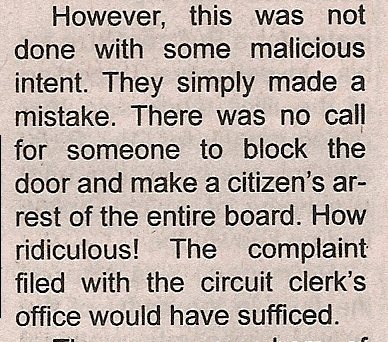 Now he tries the old song and dance of “friends and neighbors” and “well-regarded people” and “would not consciously violate the Open Meetings Act”, when that is precisely the point. They DID consciously violate the Open Meetings Act, I asked for comment time, they said “NO!”, and continued with their decision even after being notified they were breaking the law.

Being elected by “friend and neighbors” and considered “well-regarded people” have nothing to do with this, if anything it should have pushed them into compliance with the law, not willful violations of it.

They consciously broke the law and deprived taxpaying citizens of their RIGHT to address the board. It is not an option!

They also consciously violated other laws, including the Illinois Constitution Article VIII, Section 1 (a)(click here), by accepting compensation for their service. It is impossible to not know you are getting a free boat pass and other items when you know you did not pay for them and it is annotated so on the invoice. 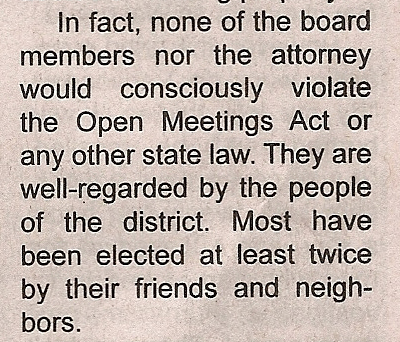 Strohm then tries to make the case this was an “honest mistake” and should not have been put out to news agencies. If it was an honest mistake I might have agreed with him. This was deliberate, even after being asked, even after being informed they were violating the law, and especially after 30 plus people waited in the heat for almost 2 1/2 hours anticipating their chance to address the board.

As one board member put it, “it was a slap in the face” of everyone present. 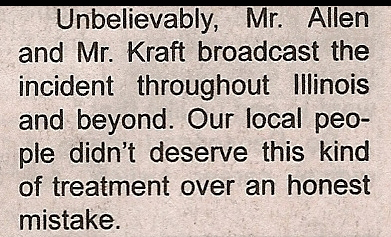 Discouraging “good” people from devoting their time to spend on these boards.

Good people with good intentions do not restrict public speech, violate the OMA, accept compensation for service required to be performed without compensation, demand other free things, set-up certain events that promise to enrich themselves in years to come.

Good people will always be willing to serve, those that point at this as an excuse to not serve are the ones that do not have the best interest of the public on the forefront.

As far as resignations, I say it is unfortunate there have been none, for there should be at least two immediate resignations for accepting compensation and conflicts of interest. 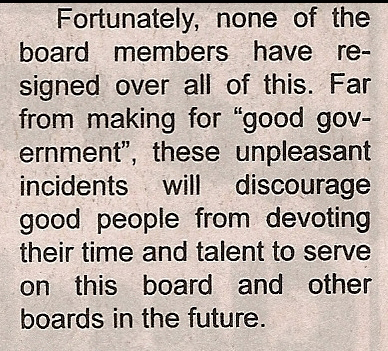 What is most amazing to me, is why it took two months for this article to be published. Many local, regional, and national news agencies have reported on this and none of them even came close to stating this was wrong. Even the American Bar Association Journal has reported on it with reader comments being positive. Which leaves me thinking the same things I wrote in the beginning paragraph.

Why do local newspapers stoop so low in order to keep from reporting truth?

It took very little effort to find out, through public records, who left public session off of the agenda.

The video shows the board knowingly violated the law.

All I am asking our readers to do is to look at the evidence presented in public records and in video, and make up your own mind as to the applicability of the events of May 12, 2014. Additionally, remember that “blame” is not placed on every board member because there are good board members on this board that have the BEST interest of the public in mind. There are also more good people ready and willing to step in should the need arise.