Attorney John A. Weimar, supposedly the Village Prosecutor of Alsip, Illinois and several other villages decided it was a good idea to verbally attack and threaten a local mother who is 9 months pregnant, and then call the Orland Park Police Department on her.

In another strange twist of events surrounding the Orland Park Public Library (OPPL) scandal in which citizen are exercising their constitutional right to try and persuade the OPPL Trustees to block child pornography in their public library, yes, child pornography, Megan Fox and Kevin DuJan decided to pass out flyers in Orland Park.

Little did they know that the husband of the OPPL's Director, Mary Weimar, would commence verbally attacking and intimidating them for simply passing out flyers in the neighborhood where he happened to live. Fox and DuJan have a constitutional right to pass out the political flyers, EDIT: but a Village Prosecutor from Alsip, told them they needed to register with the police and get permits to pass out leaflets in Orland Park, a false statement. He also made threats to call the Will County Education Superintendent  to harass her for homeschooling, insinuated that the IRS should investigate their fundraising, and further stated that he "was connected" on Cook County and that she would have to file any complaints against him in Cook County (must have been why he did not received a citation for his actions).

Mr. Weimar accused them of parking too close to the sidewalk, which was not the case, and called the Orland Park police. The police sent an officer who determined nothing had happened and let them go, but only after running their license plate number without probable cause that any crime had been committed. Weinar is reportedly a former village prosecutor for Orland Park, which could have played a role in the police department refusing to issue him a citation for flashing his "badge" and threatening Megan and Kevin.

John A. Weimar used his Alsip, IL. Village Prosecutor "badge", flashing it around like he was a police officer or with the purpose of insinuating that he had police powers in Orland Park, which he does not have. The powers of a village prosecutor stop at prosecuting village ordinance violations in the village that he is contracted with. He has no police powers, no matter how bad he wants them, besides he probably couldn't keep his temper in check long enough to make an arrest if he had the powers.

John A. Weimar was allegedly the former administrative hearing officer for Oak Forest, Il. when he took "medical leave" from that job, but only after being the focus of an unusually high number of complaints about what went on during hearings when he was the hearing officer (article here).

This was nothing more than intimidation and retaliation for speaking out during library board meetings.

This whole ordeal happened in the immediate vicinity of this address:

Video below, as well as photos of the neighborhood where this happened - you can also see much of this in the video background (photos and video provided by Megan Fox, screenshots are from Google maps):

EDIT: The "pending case" this scumbag keeps talking about is the Ordinance Violation signed by OPPL employee Bridget Bittman in an attempt at intimidating Kevin into not talking during public meetings. CORRECTION: The exact charge in unclear as he has not been told, other than "disorderly conduct", an alleged ordinance violation. What exactly is meant by that has not been disclosed. See our report (here) on this set-up between the board, the Orland Park police chief, and the board's attorneys. Read the time-line of events in this scandal (here). 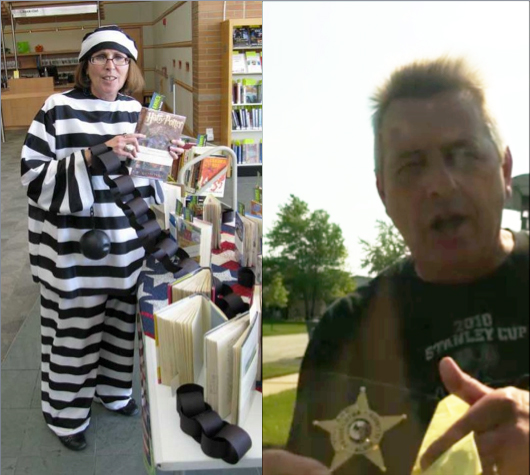