ARCOLA, IL. (ECWd) -
The Arcola Township Clerk, Mr. William Coombe, has decided to take it upon himself to violate the Illinois Freedom Of Information Act "FOIA"  on behalf of the people of the Township of Arcola. You should all be proud of him - he tries really hard to keep secrets.
On May 6, 2014, Mr. Kirk Allen served a FOIA request on the Township of Arcola seeking copies of all FOIA requests sent to the township since January of 2013.
Mr. Coombe, being the brilliant person he is, took it upon himself to determine that asking for copies of something was really asking a "question" - and he even emphasized that word in the denial with an exclamation mark! Maybe he thought an exclamation mark would make it more believable?
Mr. Coombe please read the Freedom Of Information Act, and read it enough times to where you will understand it. I certainly hope you did not get any advice from your attorney when you denied that request. If you did, it is incompetence at the highest level. Unless, of course, you are assisting him in covering for the statements he made in open court to the Judge - TWICE.
Anyway, one of the very first things you must do when you receive a FOIA request is to make a copy of it and put it in a file where copies of all FOIA requests go. That is mandatory. Mr. Allen knows you have at least 30 FOIA requests in that time period because he was in the courtroom when your attorney, Mark Petty, stated so...twice...to the Judge...in open Court.
This is a repeated common action of the Township of Arcola in a feeble attempt at keeping from releasing PUBLIC records. You are a disgrace, please resign.
As always, supporting documents are below - click on them to make them bigger. 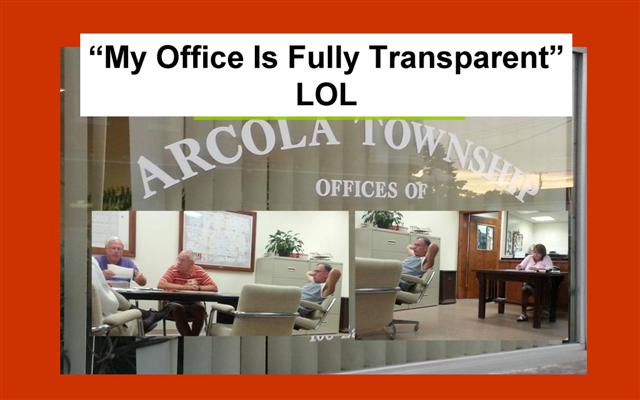