ILLINOIS (ECWd) –
We recently received a letter received from a Divisions Director of a Memorial Hospital takes a shot at an article written touting the grand benefits of wind turbines mitigating the effects of climate change. I have redacted the name of the hospital and the name of the writer to protect them from unnecessary harassment by people who may not agree with him:
I know you have been swamped with many items on your plate, but I wanted to revisit the email I sent you in February regarding Wind Turbines and hospital’s role in ensuring the safety and well being of their communities.  The below article demonstrates the lack of education executives of hospitals have regarding the harm and health effects of some “natural/green” energy sources.  Even though they are marketed as being “green,” it is obvious to families that have been harmed that they have not done their research to protect their community members.  As my CEO, xxxxxxxxx, has always said to the staff here at xMH, ”We offer many services that do not financially benefit our organization, but offer them to meet our community’s needs.”  In addition, xMH’s mission: To positively influence the health of those we serve, makes a loud statement in this situation.  Wind Turbines do not positively influence the health of any family, child, or other living creature, and if proper education is conducted, hospitals executives in our State will become mindful of the harm already being done in their communities or prevent harm in the future.
Should you wish to meet or talk to learn more on how we can help you educate hospital executives (especially those who serve rural areas), feel free to give xxxxxxx, xxxxxxxxx, a call or drop him a note.  His contact information and the article that prompted this email is below.
This is the article that prompted the email exchange (CLICK HERE).
This kind of makes you wonder what the real agenda of the Vermilion County Health Department is when they refuse to take complaints on Invenergy’s California Ridge wind turbines, especially now that a local school superintendent and a hospital director have written letters referencing the same things. 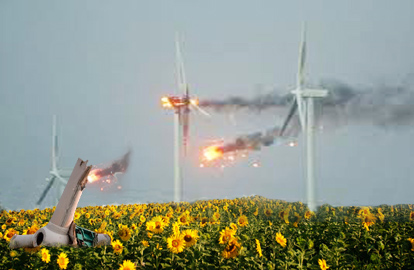