PARIS, IL. (ECWd) –
Dee Burgin, “the gift that keeps on giving”, a disgraced former Deputy Sheriff, found guilty in federal court of civil rights violations on a young woman, former ambulance service owner that got away with not paying the $100,000 sale price to the taxpayers of Edgar County, current member of the Emergency Telephone System Board, and current employee of the Newman Police Department and Lawrence County Ambulance Service, has forced his name into the spotlight once again and we are more than happy to oblige.
Prior to the primary election someone mailed a cowardly two-page letter to voters of Edgar County, and we believe he was the culprit (here and here).  Now we have confirmation from him that he bought the “Take the Ed out of Edgar County” signs that ended up on people’s property that did not appreciate them being there.
Last fall someone had started putting these signs up around town and I immediately thought there was an underlying motive, other than the obvious message, to alienate a public official because he “isn’t from here” and “isn’t one of us”. But, Mr. Burgin is still entitled to his opinion, you know, even though he isn’t “from here” either. Two of the larger, more noticeable, 4 foot by 8 foot hand-painted signs were placed and kept on Chris Patrick’s Zimmerly Ready Mix property and in Mike Heltsley’s front yard – and a small minority of people still wonder why there is a problem between the county board and the Sheriff.
In the days leading up to the primary, someone had installed smaller versions of these signs on people’s property without asking permission, and in the county and state highway right-of-ways (ROW) – public property. At least one property owner called the Edgar County Sheriff’s Department and filed a criminal trespass to property complaint against whomever placed the sign on their property, stating they were exceptionally alarmed and disturbed at the signs that appeared to have a subliminal hate message that went along with them, being that the sign was painted black with florescent green lettering.
During the investigation, the Deputy questioned Dee Burgin who admitted to purchasing the signs, but denied remembering who he gave them to, and claimed he was out of town the entire weekend that the signs were installed. But he did say that some of the signs had been stolen…I wonder how he knew that if he couldn’t remember who he gave them to and was out of town when they were installed. He later stated that one (by name) property owner called him to talk to him about the signs.
That’s where we can verify the lie, because that named property owner stated that he never called Mr. Burgin about signs or any other matter and he offered his phone records to the Sheriff Department as proof that he never called Burgin.
This situation is still under investigation, and from what I understand has been referred to the State’s Attorney  for possible prosecution.
I doubt if anyone observed the sign installations because cowards work in the dark of night to avoid being caught. But just in case, if anyone has any information on who put the signs up, or saw anyone putting the signs up, please contact us through our hotline and we will keep it confidential – but we must be able to verify the information.
I will personally ask the County Board to remove Mr. Burgin from the ETSB board immediately, for cause, and that cause is that he lied to the deputy during the investigation – which in and of itself is a crime.
Our “spoof” on the original sign: 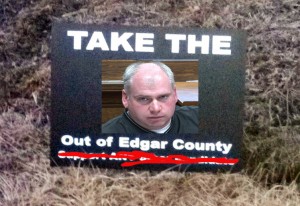