Quotes from wind companies:
.
“Obviously, we are concerned.”  Scott Simons, a DTE spokesman
(To that we say, “No sxxt, Sherlock!”)
.
An Orangeville New York wind turbine blade failure prompted this response from Invenergy:  “No oil was spilled in the incident.”
.

How much oil is in these turbines?  Are oil leaks the cause of these turbine fires we have been seeing? ex: A 16 year old daughter came home late one night and said, “Mom, Dad, I wrecked the car.  The good news is that there were no injuries and no oil was leaked.  Can I still have my full allowance (power tax credits) and continue wrecking cars and being a menace to society?”  The power tax credit (PTC) and government mandates are the reasons why wind farms continue to be jammed down our throats.

It is entertaining to hear some of the responses from wind energy companies after blade failures and/or fires.
“Such failures are rare.” E.on Hasson, (E.On Renewables)
.
(E.on must take cues from Invenergy’s attorney, Mike Blazer.  This falsehood sounds EXACTLY like something he would say.)The Merriam Webster Dictionary says that “Rare” means:  “seldom occurring or found.”  This is NOT how to describe wind turbine blade failures.Our internet browser took an entire 0.33 seconds to provide these results for “wind turbine blade failure”  This search included NINE blade failures of GE 1.6-100 model turbines.
.
Here’s a brief summary of United States wind turbine blade breaks:
.
Nov 28, 2012:  Invenergy Vermilion County blade break wrapped blade around the GE 1.6-100 nacell.  (Vermilion County blade failure #1)
.
March 11, 2013: A blade broke in half at DTE’s Thumb Wind Park.
.
June, 2013:  E.On Renewable’s GE wind turbine blade broke in Settler’s Trail Wind Farm in Iroquois County, Illinois
.
Nov 7, 2013: A blade snapped in half and fell to the ground at DTE Energy’s Echo project in Michigan while a newly installed turbine was being commissioned.
.
Nov 17, 2013: A blade sheared off on the fifth day of commissioning of “turbine 34” at Invenergy’s Orangeville wind farm in New York state……debris 1500′ away.
.
Nov 20, 2013: A second broken blade at Invenergy’s California Ridge project in Vermilion County Illinois (Verm Co blade failure #2)
.
Feb 19th, 2014:  Tipton County Indiana E.On Renewables (Tipton blade failure #1)
.
April 2nd, 2014:  Tipton County Indiana E.On Renewables (Tipton blade failure #2)
.
April 21st, 2014:  Nebraska Invenergy Prairie Breeze blade failure
.
These last few days, local residents of Vermilion County have noticed a LOT of increased wind turbine repair vehicle traffic in their area.  Maintenance trucks with “Broadwind” labels are running around the countryside.  The Broadwind company website proudly boasts “Comprehensive blade inspection, repair and remediation”
http://www.bwen.com/comprehensive-blade-inspection-repair-and-remediation
Well, folks.  This whole situation does not sound rare since there are companies dedicated to do “Comprehensive blade inspection, repair and remediation” and these blade breaks keep happening.
.
We’ve seen many banner signs out there in Invenergy’s California Ridge wind farm which say, “Now Entering Wind Energy Sacrifice Zone” and “Ignorance and Greed is what Wind Developers Need” and “Research Shows Turbines Harm Rural Families” and such.  We at Edgar County Watchdogs think they need to add, “Caution: Watch for Falling Turbine Blades” at every wind turbine at 1500′ distances from each turbine because that is the distance blade pieces have been reported to travel.
.
“Falling Turbine Parts: In Case Of A Fire In The Nacelle Or On The Rotor, Parts May Fall Off The Wind Turbine. In Case Of Fire, Nobody Is Permitted Within A Radius Of 500 Meters [1,640ft] From The Turbine.” –Nordex Safety Manual
.
If you think wind turbines are “safe,” then look at all of the information and articles here:  http://fairwindenergy.org/HealthSafety.html
.
These are dangerous machines which have multiple failures and fires.  They should not be constructed near homes and no children should ever be allowed within 1,640′ of an industrial wind turbine.  It is unthinkable that these things are permitted to be constructed within 1200′ of a residential structure in Vermilion County.  The public health and welfare is not protected with these setback distances.
.
Photo from “Albion News Online“.
. 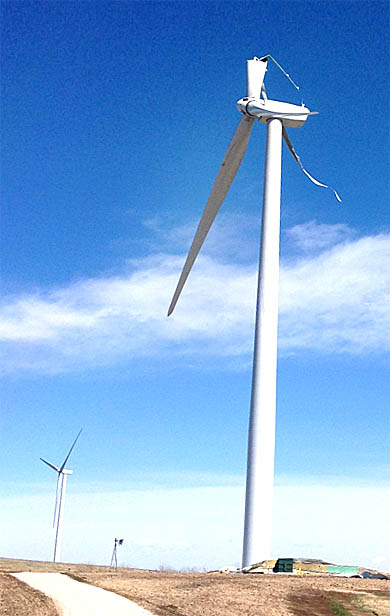