SPRINGFIELD, IL. (ECWd) -
Representative Brad Halbrook, 110th, is the sponsor on HB 5344, a bill design to strengthen the Freedom Of Information Act to put courts, circuit clerk, probation offices, and state's attorneys subject to FOIA. (WTYE ran a short article here).
Background:
In 1983, the Local Records Act (LRA)was amended after passage of the Freedom Of Information Act (FOIA). The Local Records Act includes Courts, State's Attorneys, Probation, and Circuit Clerks as public entities required to make records available for inspection. However, with passage of FOIA, the legislature amended the LRA in Section 15 to state that "...the provisions of Section 3a of this Act, as it relates to inspection of records, shall apply only as to records and reports prepared or received prior to this date. Records and reports prepared or received on or after July 1, 1984, shall be covered under the provisions of "The Freedom of Information Act", approved by the 83rd General Assembly." (Section 3a of the LRA pertains to the records of receipt, obligation, and use of public funds)
With this amendment to the LRA, records that were available for inspection became unavailable by virtue of the FOIA not including the language making "courts" subject to FOIA. I contend the "Legislative Intent" was to keep the definition the same in both Acts, but was unintentionally overlooked.

It is currently held in committee awaiting amendment(s).
Edgar County Watchdog, John Kraft, was present with oral testimony in support of the bill, citing recent problems with DeWitt County and the issue he is having obtaining credit card receipts from the DeWitt County Probation Office. Current court opinions have placed probation and circuit clerks firmly under the "Judicial" system and not subject to FOIA. The Attorney General has sided with DeWitt County on this issue citing the judicial exception. An upcoming Illinois Supreme Court opinion will decide the issue with State's Attorney Offices and FOIA. The Illinois Press Association and the Appellate Prosecutor's Association both indicated support for the legislation with amendment. Most every legislator on the committee voiced support for the bill with amendment. 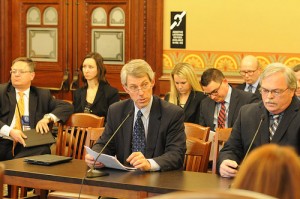