PARIS, IL. (ECWd) -
In the March 13th Beacon News, the article on Roger Hopper (Democrat) seeking Sheriff's Office, he informed the reporter that he "graduated from Paris High School in 1977".
I have been trying to stay out of the local Sheriff's race and let people make up their own minds, but I cannot sit silently by when false statements are put out there as truth.
That is not a true statement, what the truth is, is that he dropped out of school after his sophomore year and later obtained a GED (Page 3 of this document).
I would be more inclined to believe what was written on a job application over what was said during an interview, so my belief is that he did not graduate from PHS at any time.

What Else Is Out There?

On his campaign website page "Why I am running for Sheriff" he complains about not seeing certain crimes reported in the paper since the current Sheriff took office. Trying to make people think it was the Sheriff's fault and not the fault of the paper. This article details which crimes people were arrested for, by month (Click Here).

He also claims "no drug arrests" are being made by the Sheriff's Department - another lie - see the article linked (Click Here). 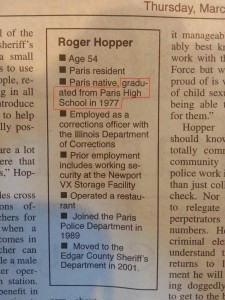 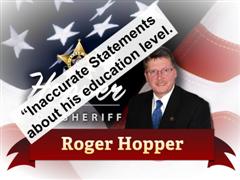