Reggie Phillips – the rest of the story!

ECWd’s -110th State Representative
As the primary approaches the mud is starting to sling. With claims we are not reporting on Reggie Phillips, and insinuations we are getting paid by him and Brad Halbrook, we thought it best to address the recent accusations presented to us pertaining to Reggie Phillips.

After the last article on Kevin Garner found here, it was just a matter of a day or two and we were swamped with a laundry list of accusations pertaining to Reggie Phillips, and all indications are those accusation came from those supporting Kevin Garner.  I say that because the same time those were streaming in, there were also substantiated accusations of potential criminal wrong doing regarding Darrel Cox, which we already have the records on but have not written the article yet. We will cover those matters in another article.

For starters, we have not been paid by Reggie Phillips, Brad Halbrook, or anyone else related to the Phillips campaign to bring you the document supported articles on his opponents. These accusations seem to be typical politics when the real reporting gets done, and people get exposed and start being held accountable.

Who is Reggie Phillips?

What jumped out at me in that video is the fact after roofing his first roof, he is married to the same woman, which now reflects 38 years of marriage!  That in itself is an accomplishment in today’s society!  A testimonial to dedication and conviction to his word. Congratulations Mr. & Mrs. Phillips on that accomplishment. In addition to 38 years of marriage they have 4 children and 9 grandchildren.

He’s the owner of Unique Homes and wants to make Illinois run more like a business and bring an end to the corruption and the high cost of doing business in this state. He fully supports term limits and believes the 2011 income tax increase should be repealed.  He opposes the progressive income tax, and is convinced we need forensic audits.   If elected, he will not take a pension or healthcare benefits. (link to stance on issues)

The above statements can be found on numerous web articles pertaining to this race and Reggie Phillips but who is he really?

His opponents blast us for not exposing his children’s records in the courts or how many times his business, Unique Homes, has been sued by local government, contractors, and others.  They cite 16 cases in Coles County and one in Clark.

I do not believe that children of a candidate should ever be used as a means of attacking the candidate.  The children are not running for office.  Mr. Phillips children are grown adults and are responsible for their own actions and those actions have nothing to do with his candidacy or qualifications for State Representative.

In regards to his business, Unique Homes, which is one of several but for the sake of reporting we compiled all the cases and will reference the name, Unique Homes for all of them.  As our readers have come to appreciate, we do our homework and support our writing with documentation.  A simple search on Judici.com reflects numerous court records for Unique Homes, Unique Properties, and Unique Homes & Lumber.  Eighty One cases to be exact in Coles County.  Two in both Clark and Edgar. The people complaining that we have not reported this missed the Edgar County cases.

Before we dive into the details we need to point out a few legal terms so that there is no confusion of the facts, which had the opponents complaining understood, we wouldn’t have to explain.

Many people go to Judici.com and search a name to get details on a case.  Others see a name on the site and automatically associate that name to wrong doing.  The courts are in place to provide a venue to the citizens to resolve issues that for whatever reason can’t get resolved outside the courts, not to be confused with criminal proceedings which his opponents are all too familiar with.

The Plaintiff in a case is the person bringing the case to court against someone or some company, which is the Defendant.  Legal determinations in the civil arena typically will be a “Judgment” for or against a party, a “Dismissal” and/or a “Settlement”.

With a total of 85 cases in the court system, encompassing 3 counties spanning over 25 years, what does the paper trail tell us?  People from the opposing side of this candidate wanted to make an issue of it without sharing the details. So, let us shed some light on it.

As if 38 years of marriage and a record clean from deception, lies, and/or criminal action, unlike his opponents, I think it’s high time people start being intellectually honest with themselves and accept the fact that Reggie Phillips clearly has a background conducive to making choices that will lead to fixing this state and a history that will be tough for the Democrats to fight in November. 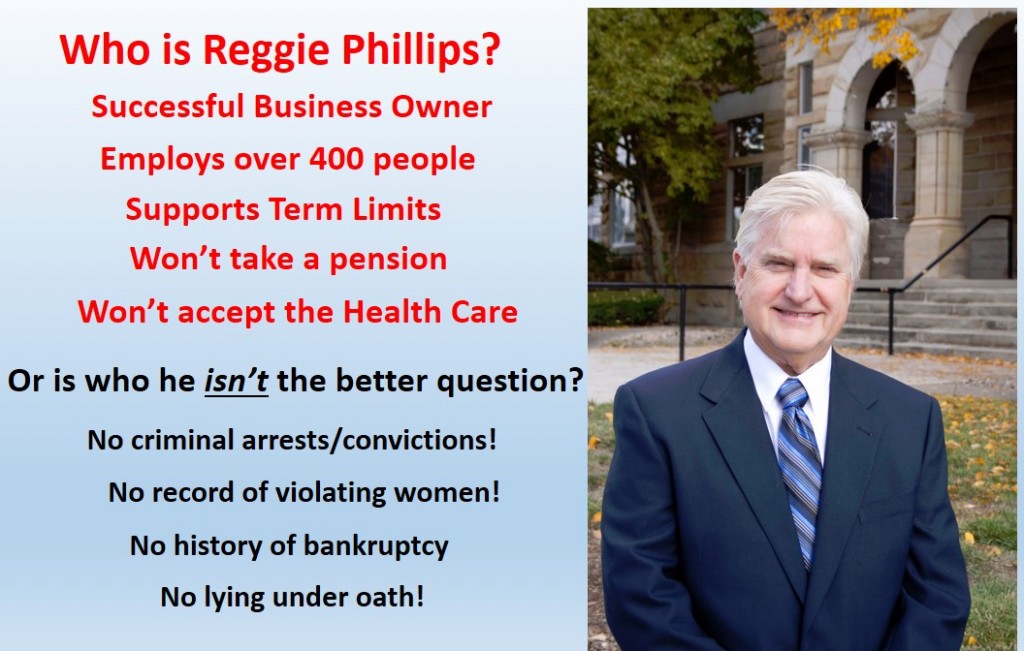