What would you do if your daughter came home and told you a law enforcement officer grabbed her breasts?

What would you do if your wife came home and told you a law enforcement officer grabbed her breasts?

What would you do if your mom cam home and told you a law enforcement officer grabbed her breasts?

Most men with any sense of a moral compass would probably be on the war path looking for the dirt bag that did such a thing to their daughter, wife or mother. However, that was not the case in Coles County when Darrel Cox not only did this, he bet that he could do it and get away with it! (PROOF)

I’m not sure what is more disgusting, the fact that this now sitting Sheriff wanted to do this, did this, placed a bet regarding doing it, or thinking he could get away with it!

Please realize, this is not some stupid stunt done by a kid.  This is an act committed by a man who took an oath to uphold the laws of this state and enforce those laws on the rest of us with a badge on his chest and a gun on his side!

As if that is not bad enough, the record reflects that not a single law enforcement person present to witness this illegal conduct took one step to prevent it.  That’s right, not one word raised from 3 law enforcement officers who took an oath to uphold the laws of this country and the laws of this state. No, instead, the current Coles County Chief Deputy Whitley stated “it would be a good bet”!

So instead of protecting a woman’s rights from the illegal grabbing of her breasts, he placed his importance on the chance to win a $5 bet!

More disturbing, if that’s possible, is the fact that Darrel Cox, Coles County Sheriff, expects us to believe his lies spoken from stage (31:00 Minute Mark of the video), as it relates to his taking an oath of office. He claimed, falsly, to take that oath seriously.  A clear lie and or false statement because his actions reported here clearly prove his words cannot and should not be trusted.  Just listening to him stand behind the oath the way he did and knowing what he has done in direct violation of that oath simply sickens me.

His actions have clearly proven his words cannot be trusted!

I think this case simply reaffirms his oath of office means nothing because as a deputy he took that same oath and it’s clear his criminal act of grabbing a woman’s breasts is a violation of law and a violation of his oath.

For all the women in the 110th district, as well as all the men with any sense of morality, if this doesn’t wake you up then I don’t know that anything will.

With 3 candidates running for the 110th State Representative District and two of them with a clear history of violating women (Cox & Garner) it should make your decision on who to vote for in March a simple one! 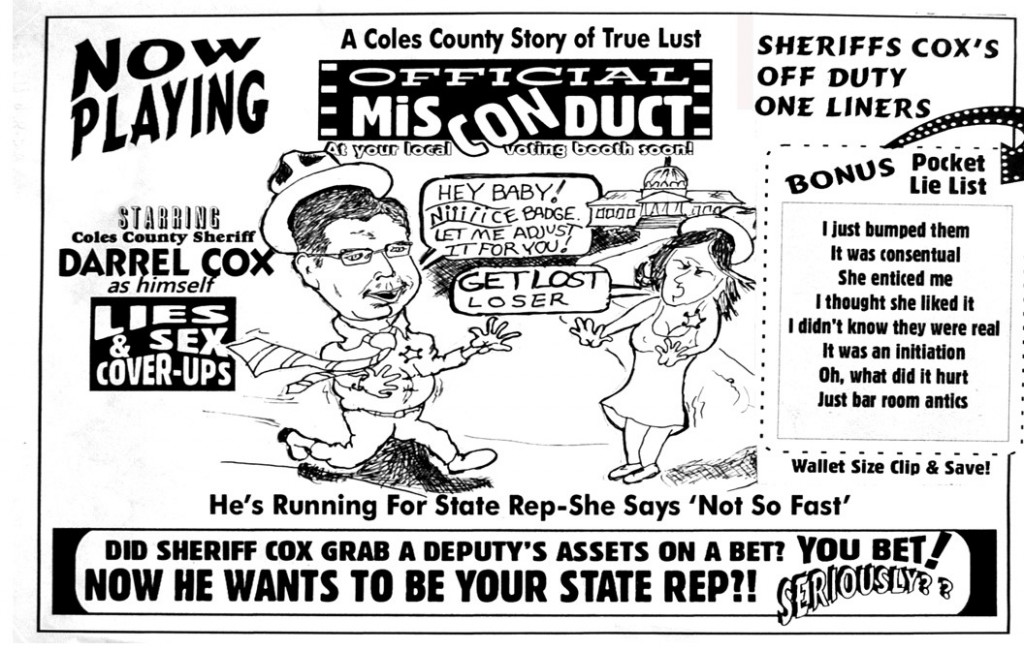 Full Coverage on the Candidates for the 110th State Representative Race