PARIS, IL. (ECWd) -
In what is clearly another example of the lawlessness in this county, the Attorney General has confirmed our claim that Chris Patrick violated the Open Meetings Act by having me removed from the June 12, 2013, Edgar County Board meeting. This meeting was a fairly lively meeting in which the lies of the former airport advisory board chairwoman were exposed for all to see... Here, and here., then there was the "medical emergency".
What is very disturbing in this particular case, is the response provided by the County to my request was substantially different than the response to others complaint for the same violation.
The County's first attempt at justifying their violation of the Open Meetings Act, was detailed in this article (click here). Their second attempt didn't fare any better for them.

Notice they tried to say that I could have kept talking during the "medical emergency" - that would have went over like a lead brick. I wonder what Adonna thinks of that comment of theirs? They also didn't offer any additional time to speak at the next meeting until after complaints were filed with the AG's office.
The Board further attempted to justify violating my rights because the speaker just prior to me, Mr. Kraft, allegedly made offensive comments. So first they claim the TRUTH is offensive, then they justify restricting my right to speak because the person before me spoke the TRUTH. It just doesn't get any better than that.

Finally, the AG's office determined that the Board violated the OMA by restricting the exercise of my right to address the board, while at the same time allowing others to speak after I was escorted from the room.
Click here to download the AG's Opinion...
.
[gview file="https://edgarcountywatchdogs.com/wp-content/uploads/2014/02/EdCoBoardViolatedOMA.pdf"] 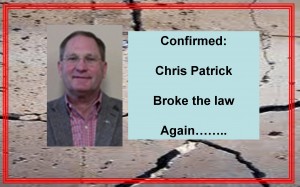