Short, sweet and to the point!  Elected officials who breach the law and ignore contract obligations have no business in public office!

Sheriff Darrel Cox, who has the most amazing laundry list of wrong doing is actually wanting your vote in the 110th State Representative race.  From misconduct to what most law enforcement officers would call sexual assault, Darrel Cox has covered all the bases.

Most would agree that a drug testing program for our law enforcement is a good thing, and one would conclude that is the case in Coles County under the misguidance of Sheriff Darrel Cox.

According to the FOP (Fraternal Order of Police) contract, the Coles County Sheriff is required to do mandatory drug testing of at least one bargaining unit member each quarter.  That would mean a total of 4 members a year are to be tested!

"There shall also be unit-wide random drug testing conducted on a quarterly basis. The Sheriff and the FOP shall agree to a selection process whereby all bargaining unit members' names or social security numbers are eligible to be selected on a random basis each quarter. One bargaining unit member will be randomly selected and tested each quarter".

So has Sheriff Cox enforced the contract within his office?

On November 26th, 2013, I submitted the this FOIA to the Coles County Sheriff.  Specifically I wanted a copy of the quarterly random drug testing results and the payments made for those test for the last 6 years.
Most people with any management skills would be able to manage 1 random drug test every quarter and the paperwork that goes along with it, however, the records reflect that not to be the case with Darrel Cox.  Not only could he not manage gathering documents for only four tests each year, he had to default to the records that the hospital kept and for the sake of saving time I agreed to narrow my request to those records the Hospital had.
In 2011 the report reflected only 2 tests performed, but I will give them the benefit of the doubt since they were counting on the hospital records to get the information as Mr. Cox didn't keep digital records way back in 2011 and the Hospital only had records from the middle of 2011.
In 2012 he managed to comply with 3 of the 4 mandatory drug tests.  I guess that term "mandatory" has a different meaning for the Sheriff.
Where it gets real interesting is looking at the 2013 results.  Up until my FOIA request there was only 1 person tested in 2013, then two days prior to his office providing the requested records a second test was performed.  Did it take a FOIA to bring a 25% compliance track record to 50%?
So what we have is the top Law Enforcement Officer in Coles County, who wants you to vote for him to become a State Representative, yet he can't manage his own office within the guidelines established by contract!   He has failed to comply with mandatory drug testing outlined in that contract and the testing he did have done represented a whopping 50% of the requirement for last year....only after receiving a FOIA for the results! (Test Results)
Another interesting tidbit is the fact that none of the testing in 2011, and only one in 2012, had any witness to the testing.  By Design?
For more history on Darrel Cox don’t miss the past reporting on his candidacy:

Upcoming articles to include: 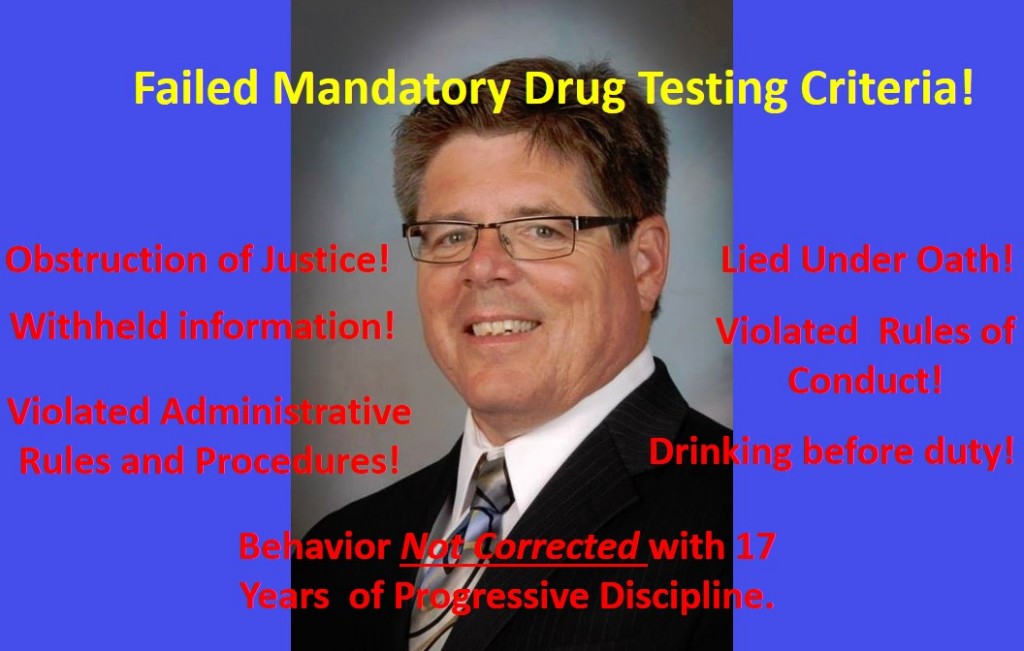