PARIS, IL. (ECWd) –
Additional information found in the FOIA responses used in this article were little things that violate the Freedom Of Information Act.
This article deals with the little statement most people put on their FOIA requests to ensure the public body acts within the five-day time-frame for responding.

“This is a non-commercial request”

That statement lets the public body know they must respond within 5 business days after receipt of your request. Commercial requests have up to 21 working days for a response. Commercial requests also can be charged for time spent searching (over 8 hours) and reproducing records. News media and non profits are but two types of organizations that “commercial” does not apply to (this exception applies to the ECWd, and each of us individually).

Having said that, what do you think was written on the FOIA request that Mr. Patrick sent requesting records for the Kansas IKE Project? That’s right…he said it was a non-commercial request. 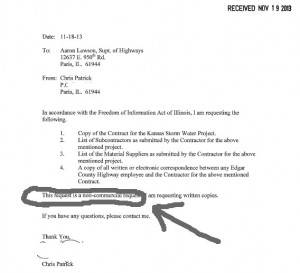 In order to figure out whether he actually used the records for a commercial purpose, I had to look at what I can prove he did with the records. One way of proving this is to look at the correspondence sent to the DCEO Program Manager.

Now, let’s look at what was done with the records received:     “I was visited by a local material supplier, Chris Patrick with Zimmerly Ready-Mix today. .. He came to me holding the Village of Kansas IDRP PI Bid packet.”

So it appears at this time, that the information he received through the FOIA request, was used to try and find a way around the conflict of interest (reported in this article) he had on the Kansas project and virtually all other local IKE projects for that matter. I would consider how he used the records as falling in line with the (c-10) paragraph above, and that he violated the act by stating it was a non-commercial request knowing what he was going to do with the records once he received them.

I’m sure there will be a long list of excuses and attempts to define certain words in a way most people would not define them, so make up your own mind. We’ve seen the “word-smithing” for over a year now, and it appears to still be going strong.