DANVILLE, IL. (ECWd) –
During the December Vermilion County Board Meeting, Invenergy was asked to provide written answers to a few questions the county board members asked of them. One such question was whether or not a NOTAM (Notice To Airmen) Alert had been called in to the appropriate authorities when the warning beacons on their California Ridge wind farm cease operating. Of course most of the citizens already knew the answer, but were surprised when Invenergy replied with an answer.
There were two incidences, but Invenergy was only asked to provide an answer for the incident involving the blade failure. Prior to that was the night of tornadoes that blew across northern Vermilion County.

“There was an outage and the lights are not powered during an outage. Attached is the California Ridge’s procedure for dealing with FAA lights that are not lit. The procedure was followed.” (Documents Here)

On page 2 of 4, in Paragraph 4.2.1, it clearly states that “Any failure or malfunction that lasts more than 30 minutes and affects a top light or flashing obstruction light, regarless of its position, should be reported immediately by calling 877-487-6876 so a Notice to Airmen (NOTAM) can be issued.”

We researched all of the NOTAMs issued during the time-frame of both outage incidences, and noticed there was only 1 NOTAM issued, and it was for a turbine 8.7 miles southwest of Danville, IL. – nowhere near the California Ridge project.
We could find no evidence of Invenergy or the California Ridge farm having notified the FAA of warning light outage in either of the two incidences in northern Vermilion County.
As a matter of fact, a citizen had already filed a formal complaint in reference to the outage during the November storms. That complaint has been escalated, by the FCC, to their Enforcement Bureau. It is Complaint Number 13-C00541692.
The only NOTAM issued is here and you can see it was for the area 8.7 miles west/southwest of Danville:
NOTAM Alert was sent out:
!DNV 11/037 DNV OBST WIND TURBINE 401113.73N0874629.95W (8.7NM WSW DNV) 1223FT (492FT AGL) NOT LGTD 1311211908-1312211907EST
Date-Time-Group: (YYMMDDTIME) 1311211908
Easier to understand:
2013 – November, 21 – 1908 hours (7:08 p.m.)
It was a 30 day NOTAM

So the questions we are left with are: 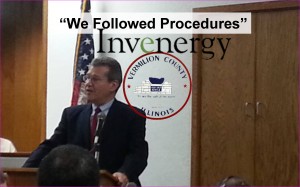