Unsealed DOJ report unveils that CNSI officials threatened to murder a whistle-blower and here in Illinois Governor Quinn and Honorable Julie Hamos have given them over $190 million in business circumventing procurement.

Earlier this year we were tipped off from various whistle-blowers that Julie Hamos and Governor Quinn were giving away 100’s of millions of dollars to vendors such as CNSI through Intergovernmental agreements with Michigan avoiding procurement and competition.  Even though the law allows Intergovernmental agreements to be formed, it was never intended to be used in cases like these.

We at Edgar County Watchdogs , Open the Books and BLN News started an investigation and put out a call for action for those who know information to step forward.  We were flooded with documents aiding us in our investigation from whistle-blowers from all ranks under Hamos.

We have FOIA requested as many documents as we can and those in power have manipulated  and in some cases instructed others how to respond so to offer limited results to the requests.  We filed a law suit and have the documents to prove that the executive team has been avoiding transparency.

The Illinois Medicaid Director Julie Hamos has an executive team who has admitted to being on a large boat in the Boston Harbor being entertained by CNSI under the direction of Ahmad and Chaterjee.  We uncovered late  night drunken boat rides, Cuban cigars and lavish dinners in this article but by all indications that was just the tip of the Iceberg for CNSI and what may well lead up to being one of the largest corruption scandals in Illinois History!

New evidence just unsealed by the Department of Justice in Louisiana outlines a scandal including taking a state official to a strip club.  CNSI appears to have  a history of dirty business and has been booted by Governor Jindal in LA and sued by the state of Michigan, the very state that is facilitating the deal with Illinois.

“There is nothing that Carrol and the CNSI guys would not do to win a deal.  When Randy Miller was with the Indiana State Government and CNSI was looking at doing business with Indiana, Carrol took Randy Miller to a strip club in Indy and stayed out all night.”

What is so earth shattering with this now unsealed information is the fact that the pattern of behavior is substantiated and it’s a CNSI insider sharing the information!

When you read that entire interview and then connect the dots in Illinois it is pretty clear the same game of manipulation is taking place in Illinois.

Are these Illinois Executives sharing information with CNSI so they can gain an unfair advantage with $300 million at stake?

Stephen Depooter was already caught earlier this year sharing information with CNSI regarding the financials of a competitor and then fencing out all competition by writing an IGA with Michigan that allows Illinois to hire CNSI to implement a new Medicaid Management Information System without bidding.

We feared for our whistle-blowers and have taken extreme caution to protect them as we feared for their lives as the Louisiana Attorney General did.  CNSI filed a lawsuit against Louisiana for contract breaches, but the public believes this was done so that they would have to reveal the whistle-blowers. I covered that in this article.

Its clear people! Illinois has no business operating under an Intergovernmental Agreement with Michigan to purchase hundreds of millions of dollars from CNSI who is accused and may face federal penitentiary if found guilty.   So far CNSI, Julie Hamos and Stephen Depooter have made a mess of MMIS implementation as reporting by Lisa Alger of CSG in a report given to Depooter.  We are asking for you to get involved!   Call your legislator and ask them to put a stop to the madness and embarrassment they have brought to Illinois.  You can find your local representative’s phone number by clicking here.

Let’s clean up Illinois together! 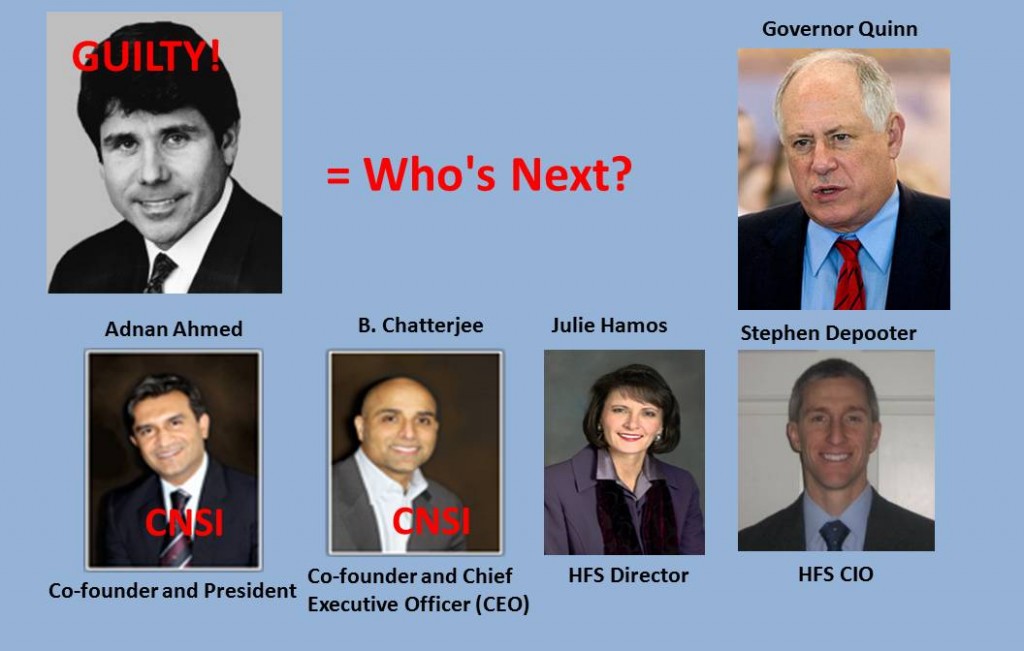