More Lies from those in power!

When public officials can sit there and lie to the public without batting an eye, it’s truly a sad day in America.

We have grown to accept it as a way of the land from th0se in Washington with an attitude that it’s just the way it is.  Sadly that attitude has infected our local level of society, and we have allowed our local government to simply ignore the law and the people.  I can assure you, if you don’t fix it at the local level it’s only going to get worse.

Elynor Stagen, you flat out lied to the public and you should resign immediately!

I asked a simple question and you couldn’t even tell the truth on action you already took!  Did Ford County Board vote to hire an attorney during their special meeting?  The answer is Yes, however such a simple answer didn’t flow out of the mouth of Elynor Stagen!

She claimed everything from she didn’t know for sure, to claiming they voted to find out what had to be done, which is a meaningless statement.

Meaningless because the fact is, not only did she vote to hire an attorney, but the very contract that is now signed was prepared and available during the meeting which Ford County unanimously voted to hire the attorney.

Worse yet, the very language in that contract spells out it was not only to look into what had to be done to separate from Iroquois County, but it also spells out they were hired to establish an independent Ford County Health Department.

The video only contains the public session portion of the meeting.  Although the other parts of the meeting are noteworthy, the points of this article are the lies that are yet coming out of Ford County appointed board member Elynor Stagen.

Boom Boom Bowen, (Rick Bowen) the loose cannon of Ford County, signed a contract just days after that vote was taken.  The vote that Elynor Stagen didn’t know about, even though she voted in favor of it! You only need to read the text of the contract to realize that this decision to hire this firm was done long before the meeting was ever held.

The Mool Law Firm, LLC, is pleased you have selected the firm to represent  you regarding the matters described in the scope of representations set forth below.

What gives Bowen the authority to secure a law firm prior to any discussion in a public meeting?

The contract dated September 17th, 13 days prior to the special meeting to approve it clearly exposes the maleficence of Bowen and the rest of the Ford County Board.

Mr. Bowen, how is it that you selected the firm prior to a public meeting to even discuss this matter?

You see the legislature understood the problems with local politics and corruption.  We see it all the time, especially with County Board Chairmen.  They get into that position and it goes right to their head, and they think they have all this power to tell people what to do and when, but in reality they have no more power than any other board member.

Don’t confuse power with responsibility.  They are responsible for running the meetings and signing contracts, but that’s pretty much where it ends, except for counties that elect the chairman at large, which Ford County does not.

In order to have a legal special meeting, several things are required to take place and we now have the proof that only 1 of the requirements took place, and that action was not supported by the prerequisite action, so even the one thing done, was done in violation of the statute.

1.  Rick Bowen, County Board Chairman made a phone call to request the meeting – Violation of Statute

2.  Request was not in writing addressed to the Clerk of the Board by one third of the board – Violation of Statute

3.  Clerk never received such written request so any action she took was without legal standing – Violation of Statute

4. Nothing was printed in the newspaper, nor should it have been since there was not a proper request.  The excuse they used was because the paper is only printed weekly, but that issue is not outlined as an authorized excuse for not publishing in the paper.

Response to my FOIA from the County clerk in which I sought copies of the documents required for holding such a special meeting.

Now with all the facts laid out, it’s time for the Ford County State’s Attorney to advice his clients, the Ford County Board, that they did in fact violate the statute for special meetings and the action taken as a result of that meeting is null and void, so they need to do it all over and do so in compliance with the law.

We will forward a letter to Mr. Fitton letting him know we intend on pursuing appropriate legal measures to force compliance in the event they are not willing to do the right thing and fix it themselves.  If they prefer the path of litigation, that expense will be on the back of the Ford County Taxpayers, and for that we are sorry but you must realize, your elected officials have brought this action on themselves.  It is Mr. Bowen that should be held responsible for this whole mess as his inability to accept facts is what has lead this county to the place it’s at today.

We encourage you to contact your County State’s Attorney and demand he do the right thing and hold this board accountable to the law.

He can be contacted at the numbers and e-mail listed below: 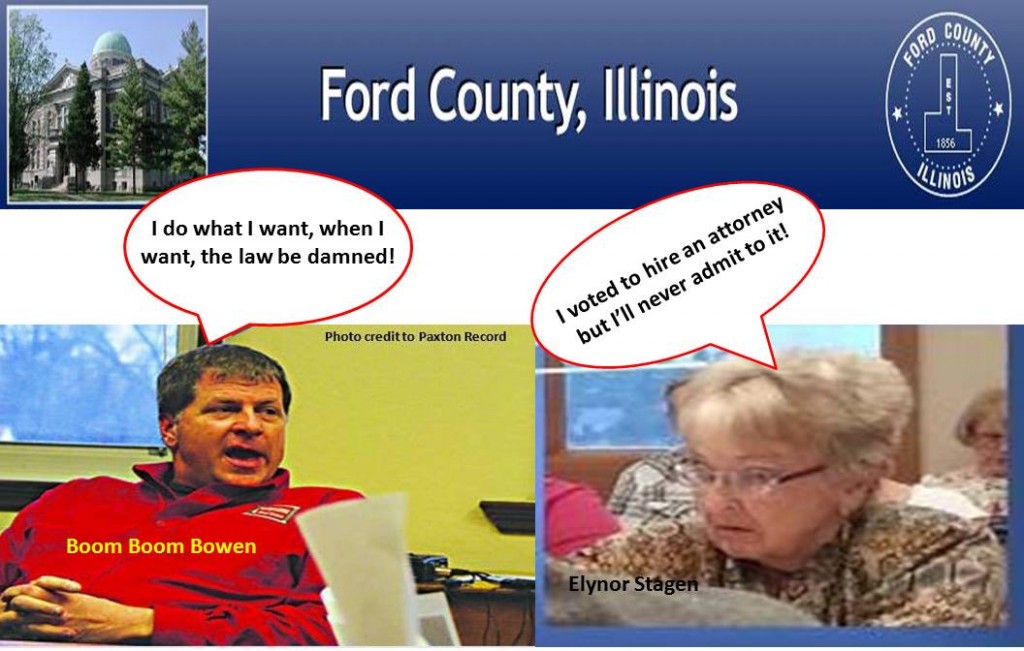