All in the Family – FIPHD

All indicators are pointing to a “FIPHD Family” operation that ensured family and employees were taken care of with flood funds even though in many cases no flooding was experienced.

The #1 recipient of funds totaling over $793,000.00 is the husband of one of the primary grant administrators, which we exposed yesterday in this article.   Turns out not only did hubby get a small fortune of business but her brother was taken care of as well.

Dan Brault – Brother of the Grant Administrator, Ellen McCullough, was provided $13,416.74 from the flood according to this document.   As we pointed out in this article, Mr. Brault worked for Arseneau Romeo Drain & Sewer which is the company listed on his claim for a new septic system.

We are awaiting a FOIA response to confirm what our sources have told us, which is that there were no home inspection reports for Mr. Brault, which was a requirement to qualify for any funding compensation from the 2008 flood grant program.

If no such inspection was done then how does a person qualify for over $13K worth of funding?  Is it because his sister ran the program and let it slide through?

Anyone in the septic business knows that if your system floods you don’t need a whole new system yet by all indications that appears to be what happen with Mr. Brault to include some road gravel which is not the gravel used for a septic system!  For those that know where Mr. Brault resides it would be interesting to know if that tax payer funded gravel was used for a driveway!

We are awaiting numbers for the grand total of business that went to Mr. Brault’s employer for septic work.  We have been told the vast majority of the septic systems replaced were done by Mr. Braults employer which raises the question, why is there a pattern appearing where those with family connections to the FIPHD are the ones getting the work?

Brooke Willms, FIPHD employee was the Flood Grant Assessor and guess what has now come to light!

Daddy got some funding too!

Multiple sources have confirmed, Joe Rorem, who lives in Gilman, apparently wasn’t impacted by the flood but that didn’t stop the family affair that ensured a new Air Conditioner, Furnace, Water Heater, Washer, Dryer, Freezer,  and a laundry list of other items that we the tax payer paid for made its way to his residence. The itemized list is here.

Was there some internal preferential treatment that ensured her father received all these tax payer funded goodies?  Considering the number of people blowing the whistle it appears to be the case.  Another FOIA was shot off today for the required inspection reports and we will update if any thing changes from what we have reported here.

LuAnn Armantrout, Senior Services Coordinator at the FIPHD was the recipient of over $24,000.00 worth of funding all while residing in Donavan which was not impacted by the flood.  You can view her laundry list of in house rewards here.

Where is the Accountability?

For months we heard from family members of employees like Larry Hasbargen.  His wife Barb Hasbargen as been with the FIPHD for approximately 19 years. 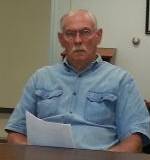 This guy called us Blow Hards when we started exposing this circus called a Health Department.  In fact this guy went on for months running his pie hole about the County Chairman and how he has no business auditing grants and demanding the Chairman call off the Watchdogs.

Hey Larry, do you think for just a second you might owe the County Chairman an apology?  In fact, I think you owe everyone an apology for all the completely unfounded and false accusations you made while trying to defend this criminal operation.  Contrary to your track record, our information has been spot on with documents and multiple sources confirming our information and directly supports each and every article we have ran.

You see this is not just our opinion but just today we received this message which can be read as a comment in this article. The people are fed up!

“I can’t help to think of the health dept board members that were removed standing up in front of the channel 3 news camera and were so sincere in saying that they did nothing wrong. They were either complicit or completely incompetent in their jobs of overseeing the actions of the health dept. I wonder if it’s still the power hungry board chairman they blame now.”

To the officials sitting on the FIPHD board, I suggest you wake up and take immediate action to fire some key people in your organization.    I would suggest you start with the employee who likes to listen in on private phone conversations, which by the way qualifies as eavesdropping and is a felony under current Illinois law, not to mention it shows childish and unprofessional behavior.

Cary Hagen should be removed immediately as the laundry list of problems in your organization circles around her desk and you have been snowed by what appears to be a highly uneducated con-artist.   She may be able to shake her hips and get her way locally, but let’s just say we have seen better shaking in worse places – it didn’t work there and it won’t work here!

I suggest the citizens of Iroquois and Ford Counties stand up and make some calls and demand accountability for the illegal spending of your tax dollars.

I would suggest starting with the Ford County Board Chairman Rick Bowen who has all but ignored this problem by failing to remove the Ford County appointed board members.  Something that statute clearly states is his responsibility!

Once you share demands with him make sure you contact each and every Ford County appointed board member who have to date been less than willing to fire people for their complete incompetence, deception, lies, and fabrication to include falsifying public documents.