Vermilion CountyBoard (full meeting video will be posted after it uploads)

This months meeting was held at 6PM and after the invocation, pledge of allegiance and roll call, a motion was made to delete item 13E on the agenda.  Item #13 E was the vote on approval for a contract with Fidlar Technologies for the county recorder’s office. No reason was given for the removal of this item to the public. A presentation of a plaque was made to Tracy McCrae for service at the former Vermilion manor nursing home.  Phil Kruzich from the Nursing Home Foundation gave an update on the foundation activities.  Since there is no longer a county nursing home, the foundation will concentrate on assisting nursing home residents with specific needs.  The future relationship with the new owners of the nursing home and the foundation is yet to be determined.  Audience comments on agenda items only are addressed at this point.  This language change, agenda items only, in the public comment section was implemented in May of 2013 and a second public comment section was added towards the end of the meeting. Other issues facing the county can only be addressed under the second comment section.  Once the counties first Wind Farm Victims were attending the meetings and informing the board of their noise and health issues, the county implemented the second public comment section. It is now 2 years and 9 months to date of the education of this board in regard to Big Industrial Wind. Starting three months ago, board members began disrespectfully walking out on Wind Victims while they addressed the weak ordinance and stating what life is really like living in the county’s first Industrial Wind Turbine Complex owned by Invenergy LLC. This behavior by board members towards wind victims has continued under this second section of public comment for every board meeting since its inception and implementation.

The speakers for the agenda items only were:

Item 11 on the agenda is Timothy Drury from Bliss McKnight Risk Manager.  The county board has brought him in to again try and stop the county residents from speaking against the counties actions on industrial wind activities.  Mr. Drury told the board that without county zoning or home-rule; they have done all that they can with their wind ordinance.  According to Mr. Drury, the ordinance is a building permit, not a land use ordinance.  As a building permit, the county can only regulate the safety of the structure.  Board member Rick Knight asked Mr. Drury if the board has done a good job so far. Mr. Drury responded that indeed if the county goes any farther, they could be sued and his recommendation is the county do nothing to the ordinance. Note on the video that during one of the single most important issue before the county, board member John Dreher reads his newspaper during the presentation. This is yet another attempt, in a series of attempts, by the county to try to justify and continue to do nothing to help the residents that are suffering from the effects of the Industrial Wind Turbines. AS LONG AS THE RESIDENTS OF THE COUNTY CONTINUE TO FIGHT FOR THIER LIVES, THERE IS NOTHING THE COUNTYCAN DO TO MAKE THE ISSUE DISSAPEAR!

Moving along, resolutions for collection of delinquent taxes and 2014 legal holidays passed with the dispensing of the readings. Debate ensued over the emergency declaration for the new JuvenileDetentionCenter surveillance system with safety being sighted as the main issue and the dispensing of the reading was voted upon again and it was not read.  The money to pay for the system will come from money the county received from the lawsuit with the city. The declaration to enact an emergency situation and a resolution passed 21-yes, 1-no (Stahl), 4-absent, 1- vacant.

County board member John Alexander approached the podium to address the board as the chair of the Finance and Personnel committee and at this point Mr. Alexander asked for a private “side-bar” meeting with the chairman before addressing the full board. This is illegal under the open meetings act and was not questioned or stopped by the assistant state’s attorney, Bill Donahue. A dispensing of the reading was passed here also. Agenda items for Finance and Personnel all passed except 13E which was deleted from the agenda.  Again all were passed with a dispensing of the reading but a motion was made to strike 13F and postpone the passing of the budget amendment until the committee has a chance to review the contract. Also the contact has not been approved yet. Vote to strike from the agenda was approved.  Was this due to Mr. Hartke’s comments?  More on this later.

Mr. Todd Johnson addressed the board as the chair of the Transportation committee and a dispensing of the reading was allowed again and the business about the county bridges was passed.

Mr. Drury (on video) went out into the hall and was attempting to answer questions and elaborate on his position, with the audience Wind Victims and others, his advise to the board that “no” changes be made to the wind ordinance. This is a must see on the video!

Appointments were approved with no discussion.

Next were audience comments for items not on the agenda. Some of tonight’s speakers were again Industrial Wind Turbine Victims who are concerned about the county’s weak wind ordinance.  The speakers were:

With even larger industrial machines slated to invade Vermilion’s rural communities, Apex (the second wind company for vermilion county and with the history of having several previous owners prior to them) and the county board are diligently working together to figure out how Apex would NOT have to reapply to the county for major changes they want to make to the turbines. The changes include increased turbine size, increased rotor diameter and locations of the turbines from what is in the existing application. Having to reapply to the county would mean they would fall under the revised ordinance. This would mean the permit dollar fee per turbine tower would increase from the $1,000.00 under their application now to $4,500.00 fee if they had to reapply. The setback per tower from the foundation of a primary structure, not the property line, would be increased a measly 200 feet for a 1,200 foot setback under reapplication. With having only a 1,200 foot setback from the foundation of a residence for these much bigger power making machines, common sense and logic tells you the setback would be totally inadequate for the safety of those rural families. Once again the county board decides that it is OK to sacrifice residents for the profits of the Industrial Wind Turbine companies.  When is the board going to be responsive to the needs of the constituents?  When are they going to finally admit that they made a mistake?

So the question becomes: What will the county do about the increased number of Industrial Wind Turbine Complex Victims in the future that will come before them, to tell their truths, of the nightmare they now live in, because of the Turbines and their Noise?

The next board meeting is October 8th at 6PM at the courthouse annex on the second floor in Danville. 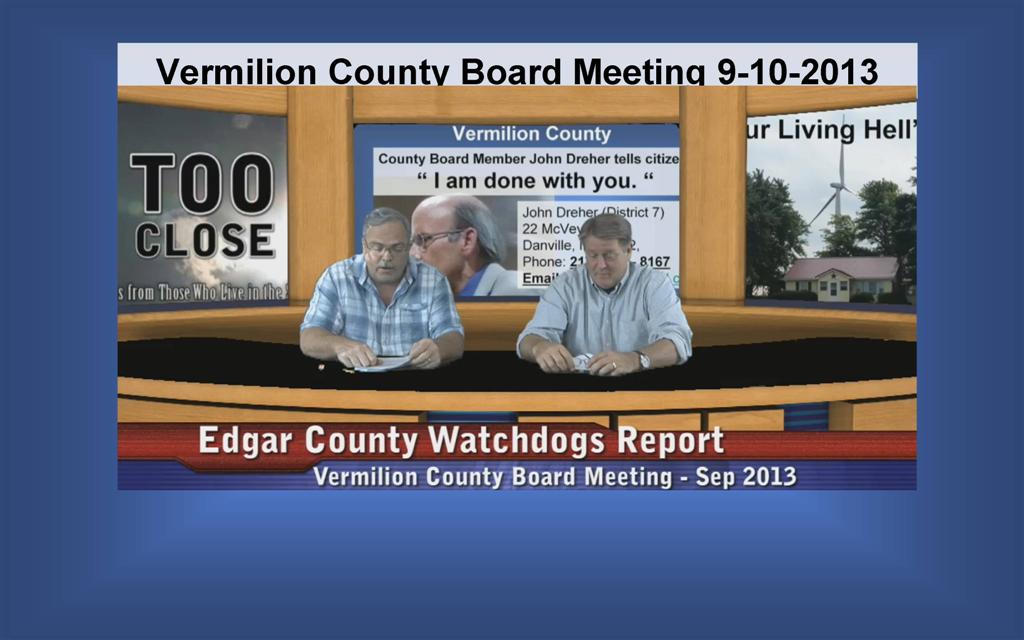