Our work has been beyond reproach and it now appears the level of forked- tongue deception reaches levels well beyond the County Governments where we cut our teeth, not that it should surprise anyone in this state.

I would first highly encourage you to read each articles we have run to get a grasp of how big this mess is, and the level of deception and lies being told on numerous fronts.

That brings us to the recent WAND news report exposing some of the behind the scene dealings on this entire project.  That story lead to this response from HFS, “on behalf of the Governor’s Administration.”

If the response is on behalf of the Governors Administration, may I first suggest the Governor fire the knuckle-head that came out with the 2nd grade level response to the claims made regarding this scandal.  We are not that stupid, nor are the people of this state!

So let’s look at the word games coming from the Governors office and see who is stupid as it relates to the above quote.

In business, outsourcing is the contracting out of a business process to a third-party.  So for starters, this contract with Cognizant is in fact the state outsourcing of a business process, MMIS, to a third part. Not only is the contract an example of outsourcing, the fact that this vendor has solicited jobs in India to fill the required positions with overseas workers makes this even worse.  Why are we outsourcing this work in the first place, let alone allowing the vendor to bring overseas workers into our state on H1B Visas to do the work our own people are capable of doing?

Prior to publishing the documents proving that Cognizant has in fact applied for over 100 H1B Visas for workers to come to Illinois and Michigan I challenge, or should I say, encourage them, to come clean on the their “Sheer Nonsense” claim.  Come clean because what is Sheer Nonsense is their own words and we are going to publish the documents to prove it and that will make them all look stupid!

“MAY   be deemed”  is language a 2nd grader could drive a bus through, Governor!

Why not forbid the action and use the term SHALL be deemed a breach and automatic termination of the contract?

While were driving the bus through this mess, let’s look at some language that would throw a red flag to a 1st year law student and any competent businessman.

“Termination for Convenience: The State may, for its convenience and with 30 days prior written notice to vendor, terminate this contract in whole or in part and without payment of any penalty or incurring any further obligation to the Vendor.”

Why would a vendor accept a multimillion dollar contract that has a Termination for Convenience clause?   As a vendor I would have to have assurances to take on this massive project and invest millions to make it work yet have no assurance that the State won’t pull the plug on me for their Convenience?

This appears to be nothing short of a hand shake deal with more loose ends than you can imagine, which more often than not, loose ends lead to back door agreements.

There is more to the back story on the outsourcing!

The vendor, Cognizant, has acknowledged in the contract it may use a Sub- Contractor.  That subcontractor listed in the contract is SLG Innovations, a company founded in Chicago in 2010.   A company, that by their own admission, “offers the application development services of its  offshore team in India as an option for meeting the needs of our clients”. SLG just happens to be a company with a president that has quite an interesting tie to scandals himself.

Ed Burns, President of SLG Innovations appears to have been around the block a few times as it relates to close business ties to those involved in scandals in other states.  Interesting articles are found here, here and here.

It should prove interesting to see how the Governors offices handles this exposure.  I suspect before it’s all over, a few contracts might just come to a close as a matter of Convenience! 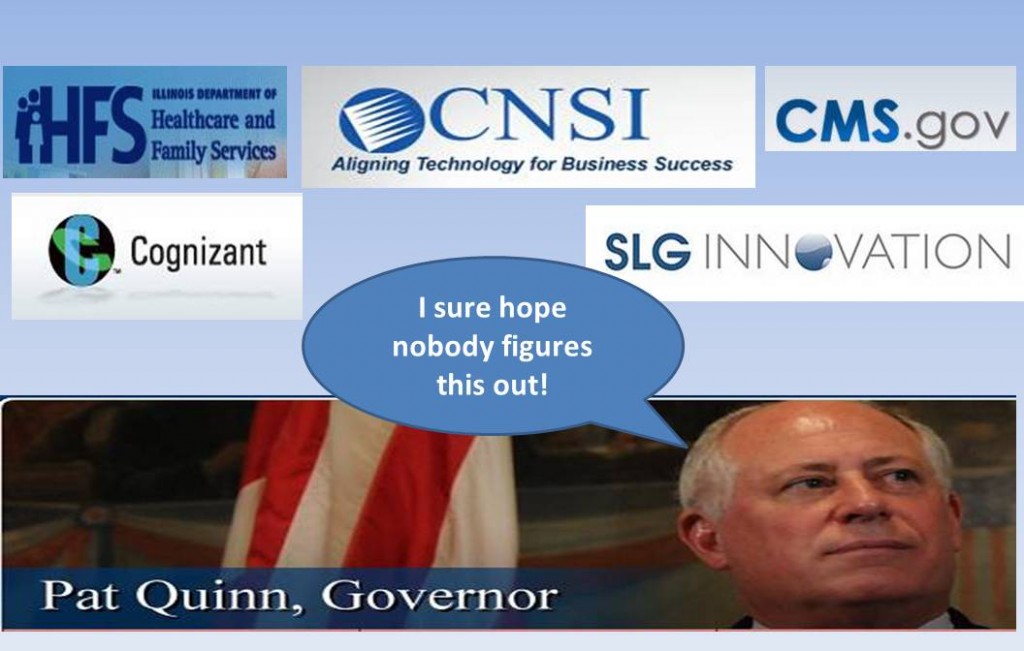