The amount of resistance to transparency, yes I used that “ridiculous” (according to Arcola Twp Atty) word, in Arcola Township is beyond anything I have come across recently. Apparently, according to their attorney, ArcolaTownship has “expended large amount of township time and money” replying to me.

If they would just reply to FOIA requests by providing the requested public records, the time and money would be significantly reduced. We all know it is more expensive to hide from requests then to simply provide what was requested.

Why would the township need to send responses to the attorney? Because the expense is not coming out of their pockets…it’s your money and they couldn’t give a damn how they spend it. In the past two years, we have learned that public bodies going this route do so simply to rack up the cost, so they can try and garner public support in their favor by claiming we are “wasting” money and costing the taxpayer a lot of money. They could simply reply, but instead insist on paying an attorney – because they can.

Below is a followup on the Township’s response to my AG request for review of the July 30 FOIA request that had not been responded to at the time I submitted the RfR to the AG.

If you count six requests in four months as “numerous”, you might be correct, but what does the FOIA Act consider “numerous” or a “recurrent requestor”?

It is found in paragraph 2(g), which states:

So ILLINOIS LAW says 50 request in 12 months, 15 requests in 30 days, or 7 requests in 7 days – but I guess 6 requests in 4 months is close enough for Arcola Township…do these people even bother to read?

By the way, we fall under the definition of “News Media” according to paragraph 2(f) of FOIA, AND we write articles following the lines of i and ii of the above paragraph, so “recurrent” or “numerous” does not apply! Imagine that…

Wow, can a public body get anymore arrogant than that?

First, I would have to say that there is no provision in the FOIA Act that authorizes a public body to declare a FOIA request as “tantamount to harassment”. I can see where they are coming from though…who do we think we are asking for receipts from a Harley trip charged to a Township Credit Card…what business is it of ours if they declare the Township Road Commissioner a “First Responder” in order to let him drive the township truck all over the place…how dare we ask for anything proving his status as a “First Responder”…ArcolaTownship just redefined that phrase.

“So You Will Know All The Facts About Mr. Kraft”

Did they really go out of their way to try and prove to the Attorney General’s Office that I am a bad person because I requested a few public records? What kind of freaking idiots do these things? What are they so afraid of?

Why would they need to send a copy of the lawsuit, as irrelevant as it is to this request for review? Are they trying to garner “sympathy” points because they know they were wrong? 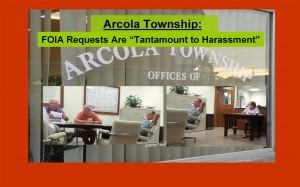