This months Vermilion County Board meeting was held at 6PM, and after the invocation, pledge of allegiance and roll call, audience comments on agenda items only was addressed.  Videos from both public comment session are below. This part of the audience comments, for agenda items only, was recently changed due to the numerous people speaking out against the inadequacies of the county wind ordinance.  The atmosphere of the entire meeting was being set by the vocal opposition of the people, and the board was getting tired of listening to the comments so they moved it to the end of the meeting.  The speakers for the agenda items were:

After dispensing with all of the readings, several agenda resolutions for delinquent taxes, the City/County agreement and GIS fee increase and contract approval, all were approved by the board with 24 yes votes and 3 absent.  At this point the county clerk, Lynn Foster made the statement that the previous vote counts were incorrect, since she had counted Larry Mills as voting yes and he had passed away last month. She said that she would correct the voting going forward.

No vote was taken on the animal shelter fee increase.  The board realized that they had made an error in their assesment of the increase, listened to the public comments and tabled the vote to send it back to committee. All other resolutions passed, 23 yes, 3 absent, 1 vacant except for one no vote on the Building and Grounds amendment by Terry Stahl.

Chairman’s comments:  new committee assignment will be coming up due to there no longer being a Nursing home committee.  The board sold the county nursing home to a private company last month with the loss of 39 good paying county jobs.  Committee members will be reduced from 9 to 7 members.

The next board meeting is September 10th at 6PM at the courthouse annex on the second floor in Danville. 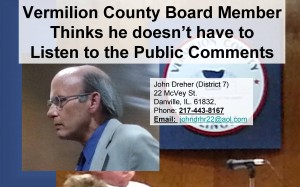 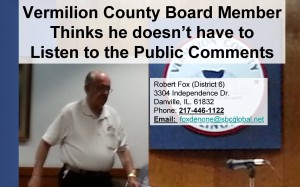 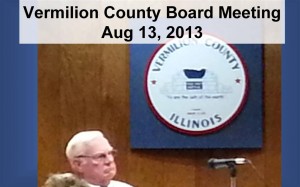