UPDATE: Video of this meeting is at the bottom of this post.

No mainstream/local media were present.

At this point Mr. Ted Hartke was allowed to speak to assistant state’s attorney Bill Donahue who was late for the start of the meeting.  Mr. Hartke again asked for a response to his questions to the board on the 20th about the letting of the GIS contract. Mr. Hartke had doubts that the contract was correctly approved. Specifically, did the GIS mapping fall within guidelines for state licensed services?  According to Mr. Hartke the approved company, Bryce Harris, is not a state licensed company.  Also, Mr. Hartke wanted to know if the GIS contract is exempt from letting out for bids.  What is the county dollar amount for the process of getting bids for contracts? Mr. Hartke has e-mailed all county board members and asked, what was the previous contract with Bruce Harris so the new contract can be compared?  He also asked this committee if it was good fiscal practice to award the contract without looking at other providers.  There were no questions or response from the committee.

Item #4 on the agenda was the recommendation for approval of the North Fork Special Service Revenue and Expenditure Budgets FY2013/2014 for areas 1, 2, & 3.  The chairman explained that these were deficit budgets, but that the areas last year did not spend over the maximum budget for the three areas.  The budgets passed unanimously.

The committee then discussed setting standard committee meeting times.  Some felt that it should be left to the individual committee members and others felt that they should survey the board members.  The committee also discussed changes to the definition of excused absences.

Mr. Ted Hartke asked to be recognized and asked if board members are required to attend meetings or could leave early.  The chairman stated that once roll call is taken the board members will be paid and can leave at any time after that under current rules.  Mr. Hartke asked in light of public comments being at the end of the meetings if this was a good county policy.  The chairman stated that it did not matter and would be willing to meet with Mr. Hartke in private.  Mr. Hartke questions were regarding board members Robert Fox (District 6, 3304 Independence Dr.Danville, IL. 61832, 217-446-1122, [email protected]) and John Dreher (District 7, 22 McVey St. Danville, IL. 61832, 217-443-8167, [email protected]) leaving the county board meeting last month during the audience comments part of the monthly agenda. At this time Kim Cambron asked to be recognized and was refused by the chairman.  The Chairman stated that the public comment part of the meeting was over.

The chairman advised the committee that the county insurance carrier will be at the September 10th meeting to tell the county what they can and cannot do in the county without zoning.

Committee member Rick Knight brought up the issue with changes to the Iroquois county wind ordinance.  It was discussed that without zoning the county could not do anything to address the concerns of the constituents. Once again the county board is going out of its way to do nothing on the wind turbine issue.  They continue to hide behind the lack of zoning to do nothing to help the rural residents of the county. The committee also suggested that it is a state issue and the county constituents should talk to Chad Hayes, but at a county board meeting earlier in the year, Chad Hayes referred county residents to the county board for help. Vermilion county resident Kim Cambron asked for the issue to be put on the agenda, either the monthly meeting or the committee meeting.  Chairman Weinard said that she could ask, but it was not going to happen today. Further questions by Mrs. Cambron were rudely ignored by the Chairman and the meeting was quickly adjourned.

The residents of Vermilion county need to ask themselves, DO WE HAVE THE RIGHT LEADERSHIP IN OUR COUNTY?  What is it going to take to get the county board to take action to help the rural constituents in the county? When is the county going to go out of their way to help their residents rather than helping the wind industry make an easy profit?

The next board meeting is September 10th at 6PM at the courthouse annex on the second floor in Danville. 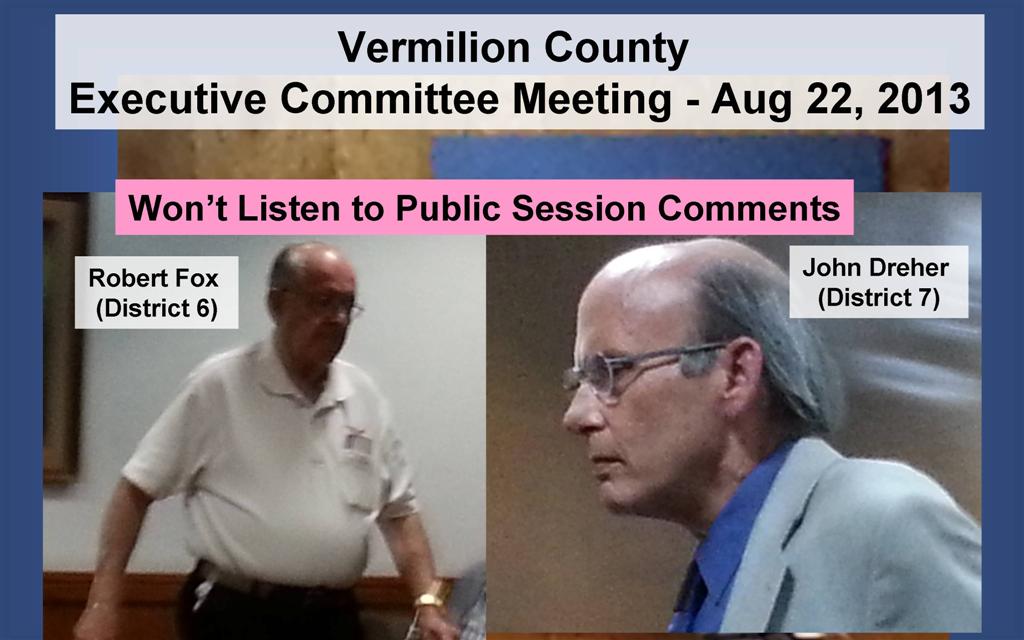