Keeping in tune with the past eight or nine months, the Edgar County Airport manager, Mr. Jimmy Wells, has once again "misled" the very people that employ him. With the amount of "misinformation" and "inconsistencies" coming out of his office, you would think he would quit listening to the former board member that has so obviously continued his attacks on a local business - facilitated by public employees.

They see no problems, even after almost one year of failures, to continue to harrass this business - even to the point of making up even more stories and trying to pass them off as the truth.

This new made up story, first time publicly stated when Mike Heltsley threw it up at the County Board Study Session on Aug 19th, is that there were four people wanting to bid on the business lease. That is a flat out lie! When questioned again, Jimmy then stated three, then one, then that one was even three months old (I think we all know who that came from). What he hasn't said, is what TYPE of business "wants to bid" on the business lease and main hangar.

Then, to top it all off, Mike Heltsley makes the claim that if they don't bid out the business lease, they will be sued. Since the county is under no obligation to bid it out, I don't know how he can make that claim, unless he is assisting the person threatening the suit...and we already know that answer...since they most likely talked about it over dinner...

Here is a 13:30 video we put together yesterday on the lies: 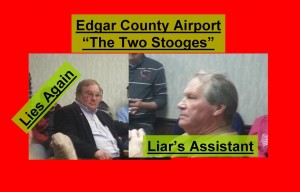