We have come to expect a certain amount of deceit in public bodies when we start unraveling what has been going on over the years, but we never expected a State’s Attorney’s Office to be at the forefront of lies and deception, as is apparently the case with DeWitt County.

On August 20, 2013, I submitted a FOIA request to the Assistant State’s Attorney for DeWitt County, the County’s FOIA Officer, seeking the following:

“Your request was forwarded to the DeWitt County Treasurer’s Office. There are no documents responsive to your request.”

So I called him and asked him why there would be no documents responsive to my request when the Treasurer publicly stated, in the DeWitt County board meeting, that “every once in a while” this type of thing happens and the people just pay (in cash) what they purchase for personal use on the county credit cards, and she reimburses the appropriate account later. He told me that never happens and I must have misuderstood what she said.

Here is the article about that meeting with the audio – see if you misunderstand it like Mr. Dunn would like to think that I apparently did…

In accordance with the Illinois Freedom Of Information Act, I request the following.

The County of DeWitt is honoring your request by providing documents retained by the County Treasurer. Personal information has been redacted pursuant to 5 ILCS 140/7(1)(c).

Here are the documents provided:

Do They Forget What They Say From Day To Day?

Here is the problem as I see it. Someone lied. Either the Treasurer lied to Mr. Dunn in regards to my 1st request, or Mr. Dunn lied to me about the 1st request. But, chances are, they will claim they “misunderstood” what documents I was seeking – even though I specifically stated what I was seeking.

How can they state no documents one week, then turn around a week later and produce some of those documents through a different FOIA?

In the provided documents, I can see several problems. Here they are:

#1.  I received a credit card statement, but did not receive: receipts/memos/claim forms.

#2.  Item #28 is clearly a personal purchase for $110.94 on this public credit card – it is even hand-written “Personal expense – see receipt” – contradicts the: “No documents responsive to your request” response from FOIA #1.

#3.  Item #28 is (improperly) redacted on what was purchased and/or where it was purchased from – contradicts the: “No documents responsive to your request” response from FOIA #1.

#4.  A receipt from the Treasurer’s Office – contradicts the: “No documents responsive to your request” response from FOIA #1.

#5.  Improper redactions on the first page of the credit card statement – it does not list the name(s), address, etc. on the card.

What Does The Constitution Say About The Use Of Public Credit?

SECTION 1. GENERAL PROVISIONS
(a)  Public funds, property or credit shall be used only
for public purposes.

I would say that paragraph makes it pretty clear; personal use of a public credit card is not authorized.

What Does The Illinois Supreme Court Say About It?

The Illinois Municiple League, wrote about several cases, one of them being the Illinois Supreme Court decision in the Pekin, Illinois Mayor’s conviction for Felony Official Misconduct. You can read the write-up below, but please pay attention to the parts about the Constitution serving as a predicate unlawful act for Official Misconduct and also the part where the IML concludes that since it is an unlawful act, any official or employee covering up or aiding the unlawful act could be considered to have aided and abetted a crime persuant to the Illinois Criminal Code.

**Mr. Lars Dunn, if you don’t read anything else, please read this again: Since the Illinois Supreme Court has upheld that (personal use of public credit) it is an unlawful act, any official or employee covering up or aiding the unlawful act could be considered to have aided and abetted a crime persuant to the Illinois Criminal Code.

**I would also submit that any County Treasurer, by accepting “reimbursement” for personal purchases on a public credit card, has aided and abetted an unlawful act, and has also committed Official Misconduct himself/herself.

Copied from page 6 of the IML link.

AUTHORITY OF ELECTED OFFICIALS TO — USE MUNICIPAL FUNDS

1.  No.  The Illinois Supreme Court recently discussed the scope of restrictions on municipal elected officials to use municipal funds or credit in People v. Howard, 228 Ill. 2d 428 (2008). In that case, the Mayor of Pekin, Illinois (Tazewell County) was using a municipal credit card for the short-term financing of his gambling habit. Although he would personally repay the municipal credit card bills each month, (with the exception of one month, where he paid the late charges, too), the court held that he had committed the statutory offense of “official misconduct” due to his misuse of Pekin’s credit. The court held “that the [Illinois] constitution can serve as a predicate unlawful act for the offense of official misconduct.” Section 33-3(c) of the Illinois Criminal Code makes “official misconduct” a crime. The Illinois Supreme Court for the first time stated that a violation of Article VIII, Section 1(a) of the Illinois Constitution, which requires that “[p]ublic funds, property or credit shall be used only for public purposes,” could be considered “official misconduct” under the Illinois Criminal Code. In upholding the trial court’s ruling, the Illinois Supreme Court found the Mayor’s personal use of Pekin’s credit card was “official misconduct” because it made credit unavailable to the village for the time period during which credit was expended and not repaid, and also confirmed the 30 month probation sentence and monetary fines imposed on the Mayor.

2.   Because this type of misuse of municipal funds or credit has now been characterized as criminal conduct, any action by other village officials or employees to cover up or aid another official(s) or employee(s) who is engaged in similar conduct may be considered to be aiding and abetting a crime pursuant to the Illinois Criminal Code. If a misuse of municipal funds or credit is discovered, the matter should be turned over to the county state’s attorney and the local police department or an outside law enforcement agency for investigation.

What Should DeWitt County Taxpayers Expect?

-Truth. The complete truth about how many people, how often, and how much money/credit is involved in the use of public funds, credit, or property over the past several years.

-Action. Put an immediate and complete stop to this abuse.

-Accountability. Hold people accountable – especially if they are charged with enforcing or presecuting our laws.

-Cancel Credit Cards. Cancel those credit cards that are not “mission essential”.

-Policy. Immediately develop a County policy on the use of public funds, credit, and property. Make reviewing it an annual employee requirement. Prosecute those violating it. 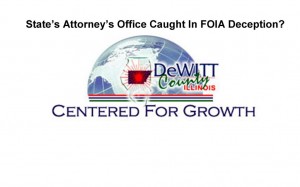