In what is quickly becoming a standard tactic for those in the spotlight, an anonymous letter has been sent (by a spineless dirtbag) to local advertisers of a newspaper in DeWitt County.

This letter talks about the business's affiliation (advertising) in the paper, proceeds to trash the publisher by bringing up old court cases and making it sound like they happened yesterday.

It then talks about how "biased" of a publication it is and how it is responsible for the destruction of the Village of Wapella and now the destruction of DeWitt County. This is also common practice of these anonymous dirtbags - immediately claiming victim status and telling everyone that this group or that group is trying to destroy whatever community they are writing about.

Then they vow to band together and stop this unacceptable publication (codeword for CENSORSHIP), and the person behind it. they then ask the business to terminate its advertising in the paper (that sounds familiar...) and claiming that the letter writer and "concerned citizens" will no longer support any business associated with advertising in this paper.

So sayeth the spineless little maggots...

There is nothing like claiming to support the rights of all citizens, then going behind their backs, in some dark septic tank of a brain, and try to intimidate local businesses, attempt to censor a newspaper, and censor what the good law abiding citizens of the City of Clinton and DeWitt County are allowed to read, and ultimately dictate what they are allowed to THINK.

Whether you agree with the publication and the articles in it or not, the  anonymous letter writer needs to burn their voter registration card and forever allow others to rule them. What a fine piece of work you are!

One final word to the letter writer: If you must hang around in the shadows instead of stepping into the light, are you a person that can be trusted? I think not! Slither away you little maggot. 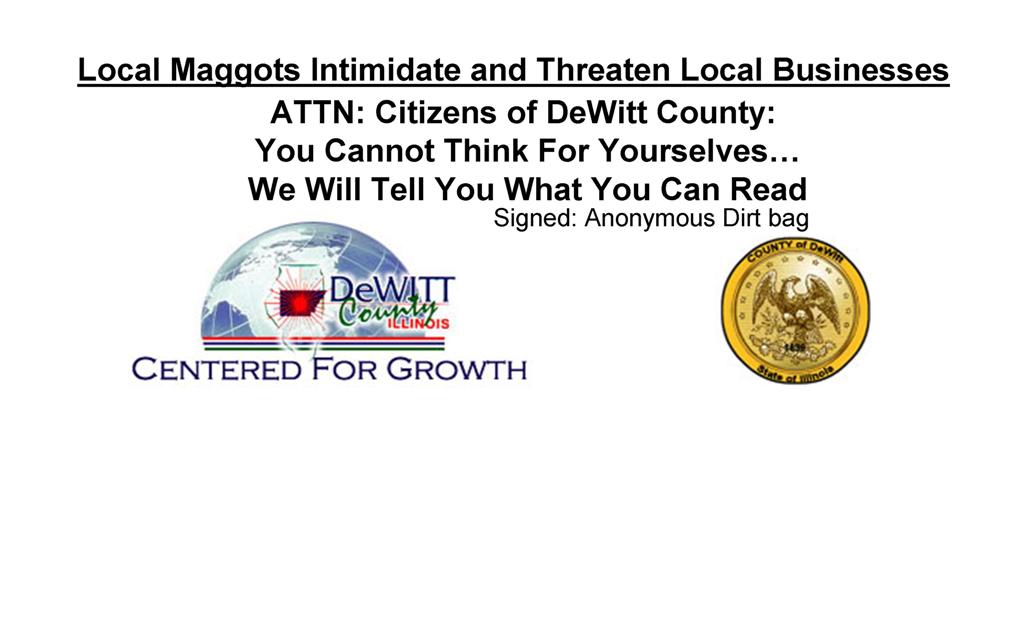