“Not In Compliance” – What Does That Mean?

One of the latest Beacon News Articles quotes Carl Farnham Jr. as saying RSB is not in compliance. The question that should be asked is, what document is he not in compliance with? The lease agreement the county board has never voted on nor approved as a valid lease? The document they were never authorized to release to Rusty and have yet to offer to Rusty? Is it a document that remains in flux and one that has yet to be written? It certainly appears that way.

So what just happened? An unwritten lease, one that has not been finalized or approved by the county board for release, and one that no one really seems to know what it includes, has been publicly used as a reference document in our local paper for disparaging RSB (keep in mind that the paper is simply reporting what is stated at public meetings).

Better yet, a document that just weeks earlier included terms thought to be reasonable by even this counties greatest critics, and it appeared would be “the one”, also gave the appearance to be a lease RSB could live with, and one that would bring “this phase of this matter” to an end.

Hell, that wouldn’t work. Just imagine the fall-out a politically correct board member would have to endure to state such a thing…to indicate publicly a lease was near…so they decided to add another requirement by making the county a certificate holder…a process requiring a new insurance policy, and one that takes time. Meanwhile, they provide an interview in which they characterized RSB as not in compliance, knowing full well the truth of this matter. We’re back to shadow boxing with the devil.

Rusty has met all of the demands thrown at him by just about anyone with an opinion, and there have been many. Beginning with insuring airport property for all hazards, including fire which the county has not. He now carries far more insurance than the airport has on itself, as well as more than all others that use this airport, including any member of the flying public.

Amazingly, he is to blame for all of our governments short comings, particularly those that happen at the airport with the manger and board only innocent citizens of the state. This is how it happens in Edgar County.

Apparently there is also a new t-hangar lease that was given to the people that lease t-hangars. This lease has never been adopted for use, yet the people leasing the t-hangars are expected to sign it. It was never voted on at an airport ADVISORY board meeting and was never approved for adoption at a county board meeting.

Another document has surfaced, and they are calling it the “Edgar County Airport Policy Manual”, which, according to Jimmy Wells, is simply the IDOT Airport Manager’s Handbook with a few minor name changes made to it.

Since we know that the airport ADVISORY board has no power except to recommend items to the county board, this “Handbook” or “Policy Manual” has never been adopted for use. The IDOT version was mentioned in their meeting minutes almost a year ago, but it was never brought to the county board for adoption.

Why is this such a big issue? Because it changes the powers and duties of the airport manager, basically changing his employment conditions.

A lease for this PUBLIC building does not exist at this time, even though it is currently filled with round bails of straw. So can we assume it is first come, first serve? If I need a place to park an old vehicle can I just stick it in there without worrying about a lease?

This question is still unanswered..nobody knows which statute (law) the Edgar County Airport is operating under. This issue is important because the statute give the airport board its powers and duties, and limits the powers and duties that the county board has over the airport. It also determines where any rental income(s) must be deposited, and it mandates the board make-up to include the process of appointing those board members. 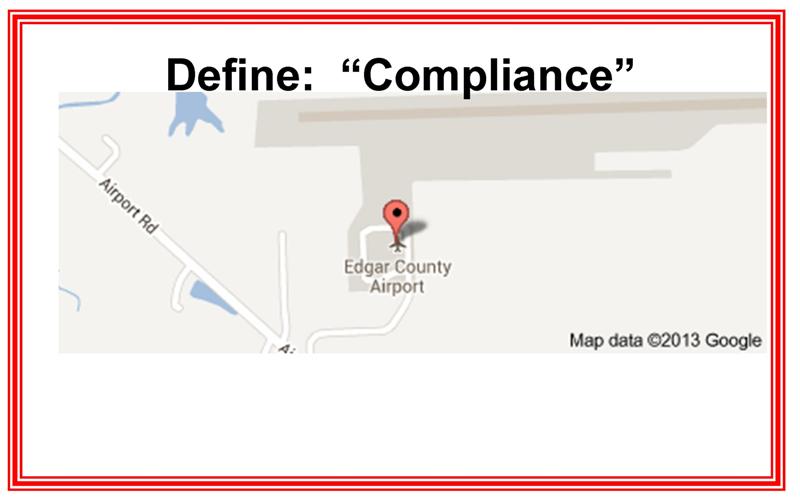