What an embarrassment she is to herself and to the elected officials of Edgar County. The display of self-promotion and the praising of Chris Patrick, who like her, have a very personal agenda in the affairs of the Edgar County Airport, drives home the fact that these people will do anything to protect their little “kingdom” that “worked so well” the past 25 years.

In fact, it worked so well they had secret bank accounts, secret donations, put CDs in their own personal names, secret loans from banking institutions, illegal meetings, secret ballots, employees running MLM businesses out there (and still are), nepotism in the hiring process, and (still) continuing FOIA violations. If only all public bodies could work so efficiently.  This has absolutely nothing to do with what is good for the County, it has everything to do with what is good for Chris.

If this is not a call to action for those of us that believe in the rights of the public, I don’t know what is. More amazing is that the chairman, Mr. “I need more space for my Beaver” himself, allowed this to continue with the berating and outright lies spewing out of her pie-hole. A public official, which is what she was acting as according to the agenda, should immediately be censured for these types of actions.

Providing testimony full of lies and fabrications – including pictures (we have a FOIA request in for those) of what appears to be RSB work areas, while at the same time allowing Jimmy Wells to keep a work and storage area that violates almost every safety, environmental, and OSHA regulation published, is more proof of the constantly changing story line as to why they want RSB removed from the airport. Now THAT is a real liability to the county. Pictures of Jimmy’s (the Edgar County Airport) area of responsibility are below. If cleanliness was such an issue, you would think they would take care of their own area prior to jumping on other people for their areas, AND it would have been brought up long ago.

Their story line changes so many times that they can’t even remember what they lied about the last time they opened their mouths to speak. It is clearer now, more than ever before, that Adonna Bennett, Chris Patrick, Ben Jenness, Glen Hutching, and Mike Heltsley are all in this together, and most likely will try to circumvent RSB signing the lease once it is finished and approved.

I urge you to go back through the county board and airport board articles since the first of Dec 2012 and listen to the audio or watch the videos again – it will refresh in your mind as to what has happened since the end of November – you will hear for yourselves the changing story lines as the weeks go by – all because Chris has not gotten his way with “his” airport.

“We Have No Respect For Each Other”

At 1:42 in the video Adonna Bennett, the illegally appointed advisory board member, says this county board has no respect for each other. I think that is “code” for “you should always vote for what the chairman wants.” Any disagreement is labeled as disrespect, right and wrong do not matter – just do what Chris wants you to do.

After that, she touted her accomplishments again and even acted like she was proud of what happened to the ambulance service. The same one that had several board members resign in absolute disgust over how political the situation had become – we have those resignations, it might take me a few days to find them. They are the ones that hired Burgin, who drove it into the ground so he could “purchase” it without paying anything on the sales contract, and to this day, nobody on the county board will seek to recover that $100,000 owed to the county. The 10 year statute of limitation on that “contract’ expires September 30, 2013.

“They don’t have a clue”

At 2:02 in the video, after her rant about this board doesn’t respect each other, she states that she is most surprised with Dan Bruner, Jeff Voigt, and Karl Farnham being on the airport advisory board, because none of them have a clue as to how the airport should be managed or how it grew in the past – “code” for “they won’t follow me blindly or show me any respect.” I hope she’s not a leading example of how to show respect with that statement – how much more disrespectful can you get with a fellow board member? I guess you think they will show you more respect now at the airport board meetings after that statement – what a joke you are! Wait! There is still the pesky little Illinois Attorney General opinion headed this way on that secret ballot, and it should arrive no later than Monday, May 13, 2013… I don’t know what it will say, but I can make a pretty good guess…

Adonna – since YOU know everything about how the airport is run, WHAT STATUTE ARE THEY OPERATING UNDER? It’s a simple question, please answer it! Chris Patrick doesn’t know the answer, even after spending TWENTY-FIVE YEARS on that advisory board, neither do Glen, Jimmy, Lisa, or YOU!

Then she states the contract isn’t finished yet, but fails to mention that Ben Jenness, Mike Heltsley and Jimmy Wells were doing everything in their power to stall the process so that it would not get finished in time – all at the direction of Chris Patrick, so he could try what failed miserably at the April county board meeting.

The Next Story Lie, Oops, I Meant to say Story Line

Just prior to 4:01 in the video, she starts setting up the next lie, I mean line, they are going to try since the rest of them have failed. She reads off a list of names of people that have donated money to assist the airport – then immediately start attacking Rusty and RSB like a rabid dog. Our previous articles have covered everything she mentioned, disproved most of it, and revealed that the airport manager was the root cause of others. When she talked about RSB, she failed to mention that all of those issues have been taken care of, or never were an issue. It was just another way for her and Chris to justify their own wrong-doing.

What is the next story-line? Simple – They are setting up the stage to state that nobody will donate anymore because RSB is still at the airport. My thoughts, if this does in fact become their next line, are that if you base your donations on who gets a contract, it is not a donation but intead is a bribe. Your money is not needed if you are holding someone or something for ransom. Good riddance and take your bribe money with you!

“Occupying Space Not On A Lease”

At 5:46 in the video, she talks about RSB taking space without paying rent, even though that space was part of the original agreement. What she FAILED to mention is:

– The space Jimmy took up for years with his own personal plane and other trash without paying rent.

– The truck that was in the hangar and later moved to the barn that was not paying rent.

– She didn’t mention the barn where straw and a hay wagon are still stored rent free with no lease because the previous lease expired in April of 2012.

– She didn’t even mention the fact that the advisory board, and her most respected man Chris Patrick was on it for 25 years, FAILED to pay property taxes on the leased farm ground – this failure started at the airport’s inception and continued for more than 30 years until WE pointed it out last year.

– She failed to mention the Airport Booster Club, who has been operating and accepting donations illegally since they had their registration revoked by the Illinois Secretary of State in 1989!

Yeah, that is how efficiently this airport has been operating when there is no one watching.

So is this really about a 5 foot by 12 foot dinky office? Or is it another fabrication in an attempt to justify what they have been trying to do.

Then she mentions the airplanes and t-hangar. Pretty convenient to talk about RSBs t-hanger, but no mention of the other t-hangar spaces, the barns, and the space in the main hangar that Jimmy and the County are responsible for – and what might be in them.

I’m tired of typing, here is the video of this embarrassment to Edgar County or you can watch it below:

These pictures are of Jimmy Wells’ area of responsibility in the Airport. When we get the ones Adonna took, we will do a side-by-side comparison. 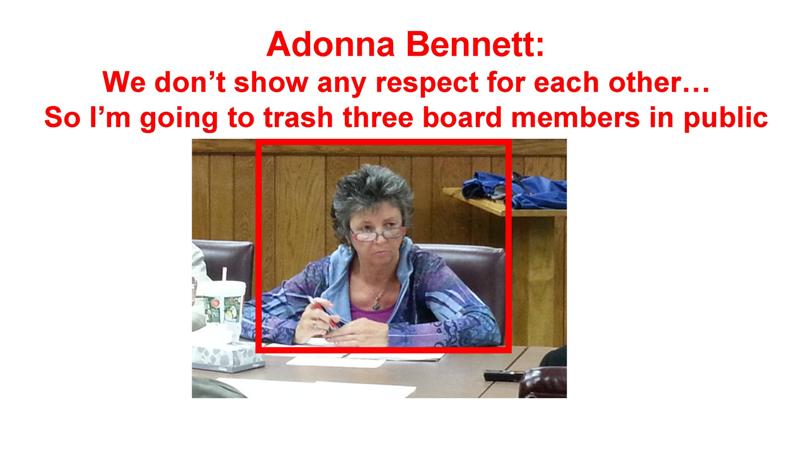