Time to have some fun!

Many may recall the Best Picture of the Year winning movie Forest Gump.  How many recall the phrase used in that movie that has become common place today?

Stupid is as Stupid Does!

The “former” attorney for the Ford Iroquois Public Health Department had made a comment in his Cease and Desist letter that when I read it, I basically ruined my keyboard from the coffee I spit out laughing.  There is not enough room to cover the whole comment so this article will just reference the first part of the comment.  We will cover the rest in future articles.

“Your understanding of the relationship between the County Board and the Public Health board, ………….. are totally faulty.“

I figured it was time to expose just a little more on these people so that the intelligent life forms in Iroquois County can determine if this is the kind of garbage you want your tax dollars being spent on.

Let’s start with my understanding of the relationship between the County Board and the Public Health Board.  They are a public body established by the County Board, they answer to that appointing authority, and are required to be represented by the State’s Attorney.  You see, we have been down this road locally and not only know the law but have the AG opinions that support our understanding.

Reading Mr. Boyer’s earlier letter that clearly had no merit, we can see that it is in fact Mr. Boyer himself that doesn’t understand that relationship!

Note that I referenced Mr. Boyer as the “former” attorney for the FIPHD!  Now why would that be?  It would be because Mr. Boyer, the very person who attempted to intimidate us with a claim we don’t understand the relationship between the two boards, has no business representing them in the first place, because it’s clear Mr. Boyer is the one who doesn’t understand the relationship between the two boards, ……………and that folks is not just my opinion!

You see, as mentioned before, we have been down this road locally and not only did we get a private attorney removed from representing a county agency, we took steps to ensure all payments made to them were recovered!

One must wonder if we figured this out and the States Attorney figured it out, who is the stupid one?

“Contracts to pay outside attorneys are without authority and void unless done pursuant to an enabling statute. Enclosed is a copy of the opinion of File No. 91-008.”

For those wondering, we never did hear back from Mr. Boyer after he sent his threatening letter that by the way, was never approved to be sent in the first place, let alone have any validity.

Now considering the State’s Attorney has advised this brilliant team of public funded stooges, I wonder what the plans are for the bill Mr. Boyer sent for $1,958.34, which was in relation to FOIA issues and his attempted threats of intimidation towards us.

This is yet another basic exposure of how out of control your local government is, and how they feel entitled to do what they want with your tax money, the law be damned.

If you think the few things we have exposed so far is trivial, stay tuned for the rest of the story.  Iroquois County has yet another huge legal case with the Sheriff’s office in the courts and I suspect that will have a hefty settlement – just like the last case, and prepare yourselves for the corrupt spending of grant money to a whole new level not yet talked about!

As I have said over and over for the last 3 years, it is the People’s Government and your responsibility to reign them in when they are out of control.  It is We The People that have to take the tough steps to put a stop to the ongoing illegal activity and stand up to these people and hold them accountable.

I am asking for all the good Men and Woman of Iroquois and Ford County to stand up and take a stand for what is Right.  Failure or refusal to get involved does nothing but send the message to these people you think its OK for them to Fleece your tax dollars!

Past articles exposing the truth, that by the way not a single person in the FIPHD have been able to refute! 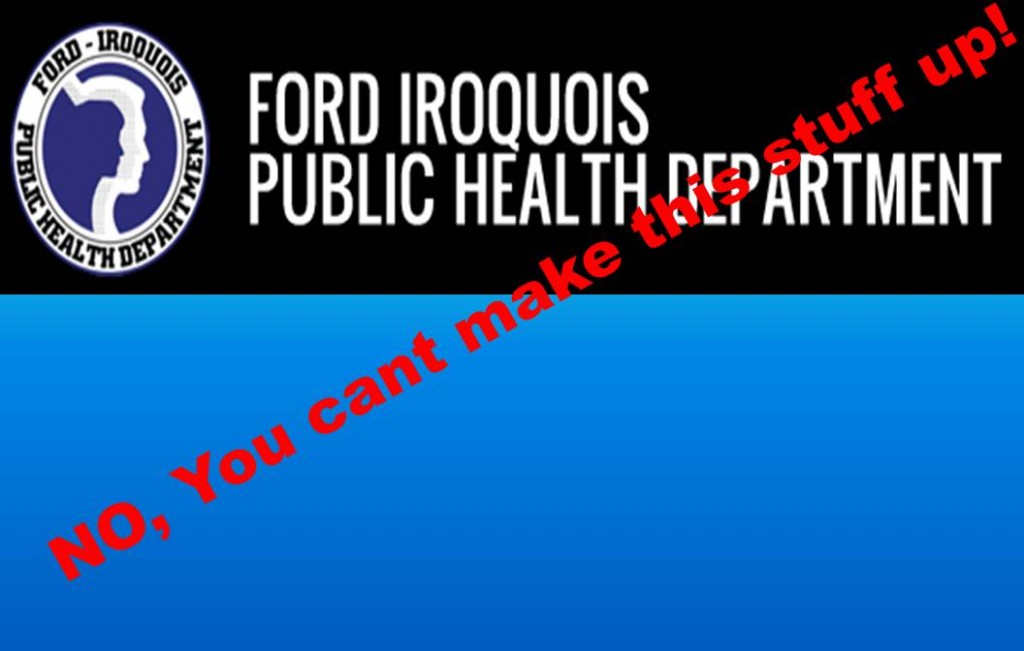