In what clearly was an act of desperation, Doug Corbett of the Ford Iroquois Public Health Department thought for some strange reason it was best to throw the Iroquois County State’s Attorney under the bus with the wild fabrication that it was his legal advice, by phone of course, that the FIPHD didn’t have to put the solar panel project out for bid.

Just as shocking was the total silence from County Board member Elanor Stagen, who is just as responsible for this whole scam on the public.  Responsible because she is on the FIPHD Board and allowed this corruption to fester and by all indications facilitated it.  Why not a single question to her, considering she is Dougie’s boss?

Does anyone in there right mind think a State’s Attorney would advise a public officer that they don’t have to put a $123,000.00 project out for bid?  Does Dougie really think we are that stupid?  Is the Ford County Board stupid enough to believe such garbage?  The most amazing part of this total lie about bidding is his comment that he followed the advice given, which he claims was not to put it out for bid.  A lie because if he followed the advice given, why did it go out for bid?  See for yourself at the 9:15 mark on the video.  Mr. Corbett LIED!

Pay special note at the 10:33 point where the Ford County State’s Attorney joins into the conversation and clearly brought the questions to a halt because the answers were placing Mr. Corbett in even more hot water.  He even eluded to it not being a deposition.  Looks like Doug just got protected as it’s evident the State’s Attorney did his job in this case to somewhat shield Mr. Corbett from further self incrimination!

One portion that points to the fact things are not so warm and fuzzy for Mr. Corbett are his comments regarding hiring a private attorney at the 15:35 minute mark.

“At the time it wasn’t felt that you can have a State’s Attorney represent you while at the same time trying to prosecute you because it’s a conflict of interest”.

Mr. Corbett has now admitted in his own words he was facing prosecution and used that as the justification to break the law again and hire a private attorney to represent the FIPHD.

The brilliant prearranged questioning from one of the County Board members  shows just how blind and willing some of them are to support violations of the law.  Does ANYONE in their right mind think that the questions pertaining to the costs of FOIA requests wasn’t prearranged?  Clearly Doug had a bunch of numbers to answer a question he knew was coming!

The ignorant question regarding the audits the FIPHD went through were  just that.  Ignorant!  Dixon, Illinois went through 24 years of audits and nobody caught a thing, yet the fact is $54 Million Dollars was stolen! Customary audits don’t catch theft and manipulation of money!  Only forensic audits do!

To get a solid grasp on this whole scandal, I would suggest reading the key article I did over a month ago, which can be found here.

Doug took the position that he couldn’t find any statute that required x, y, or z protocol.  Hey Mr. Corbett, it’s called Dillon’s Rule!  If the statute is silent, YOU CAN’T DO IT, as our laws outlined what you can do.  They are called powers and duties and you only have those established by law.

Using his logic you can drive 100mph down the road because there is no statute you can find that says you can’t do that.  Yet another example of why this man has no business in the public sector employment.

Interesting is the fact we could find the statute in less than 10 minutes of searching.  Surly he could have asked one of the 4 lawyers he had on staff to find the very statute that DIRECTLY applies to the issue at hand.

Yes Doug, that statute applies to your illegal bid rigging scam that funneled business to a company that never even bid on the project that just happen to have direct financial ties to your favored saint employee Julie Clark.  Who for some reason is capable of doing the county business from over 225 miles away while working from home.

I challenge each and every Ford County Board member to read this article and see how out of line the words from Mr. Corbett are.  One need not be a rocket scientist to see the word game he is playing.

At the 3:15 mark of the video Mr. Corbett clearly diverts from the real issue on the solar panel purchase with the claim, “Unfortunately what has happen is the big picture has not been looked at, which is why you want solar power”.

Really Doug?  Do you really think the good people of Ford and Iroquois County are so stupid to not recognize your clear diversion to the concerns of your actions?  You violated the law in numerous areas and you can claim our reporting is nothing but innuendos however you know that is a blatant lie.

An interesting question that I’m sure this brilliant administrator should be required to answer, just for the humor of his response of course, is if the State’s Attorney informed you that you didn’t have to put it out for bid, why did you?

Better question, with only 1 bid received, LEGALLY, how is it that a company that never bid ended up with the contract?

We The People are just common folk and sometimes it’s a challenge to unwrap the lies to understand what is going on, but I suspect each and every reader comprehends those two basic questions.

Mr. Corbett, you violated the law and should be held accountable and that is not just our opinion.  It’s clearly the opinion of many others.

You may “think” it’s all behind you, but rest assured the authorities are on to your games and lies and you will be held accountable.  The question now is: Will it be sooner than later?

I challenge each and every reader to review the previous articles we covered on this and download the documents and see for yourself!

You Be The Judge!

My Presentation to the Board- Prove Me Wrong! 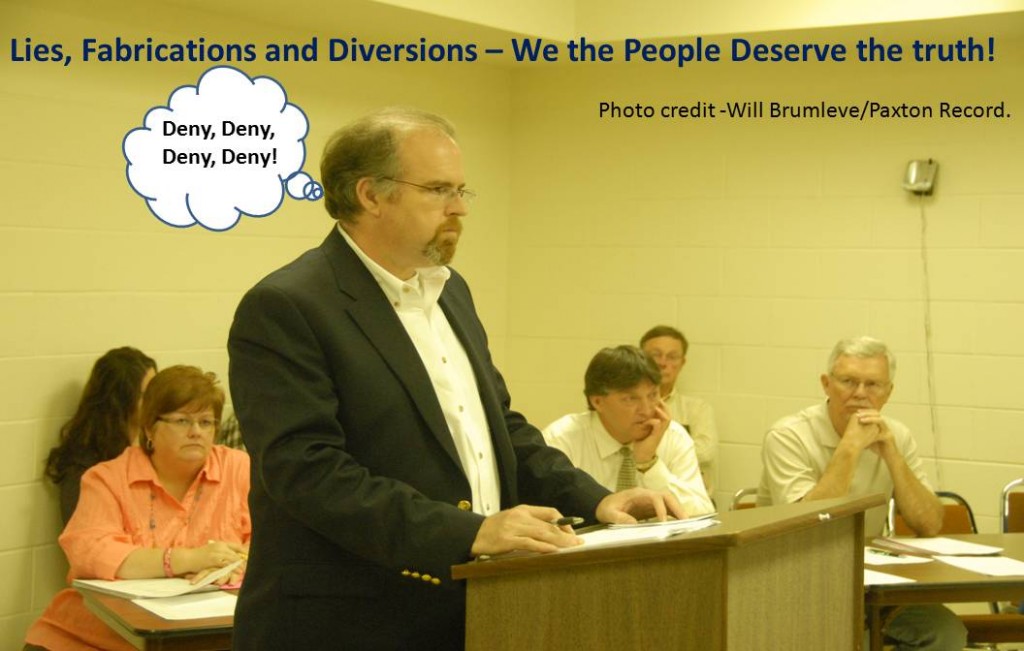