FIPHD – License and Permit for Public Documents? What?.

The Ford-Iroquois Public Health Department (FIPHD) has a problem with understanding the requirements of the Illinois Freedom Of Information Act (FOIA) and Open Meetings Act (OMA).

Through information obtained during recent FOIA requests, we have identified an alleged illegal meeting on the part of the FIPHD. This meeting took place thru emails sent and replied to by various members of the FIPHD board. The subject was whether to grant a fee reduction in response to a FOIA request.

The OMA states that "any gathering" of a "majority of a quorum" of a public body constitutes a meeting. It even defines "meeting" in Section 1.02 to include:

The email we are concerned about was discussing a FOIA request sent by Mr. Allen which requested several documents. His request was denied, claiming it to be unduly burdensome, without giving him the opportunity to reduce it to a more manageable size. This made it an improper denial. He filed suit in Iroquois Circuit Court seeking, among other items, the requested documents.

The most telling part of theses emails is some board members wanted to know what we would do with the information and whether we had "press credentials" (this does not exist other than an ID made by the news organization itself) or qualifications, license or permits that allow us to gather the information. OK Teddie, "News Media" is defined in FOIA (Section 2(f)) and there is no mention of "Press Credentials", "License", of "Permit" of any kind. Also, please explain why a person would need a certification to read grant paperwork and make comments on that paperwork...and what would the name of that certification be?

Really? Licenses, permits, and qualifications to gather public documents? Teddie Jensen, did you grow up in the old Soviet Union where you think a license or permit is required to obtain public documents? Just when I though I had heard it all, here you come and say something so far out there, if it wasn't written down I would not have thought anyone would make those claims. Please read the FOIA and see if you come up with that same statement again.

Public Interest: Gathering and disseminating information to the public is by definition "public interest", as apposed to private interest or using the documents for private gain. You do not have the right to even ask how the information will be used nor what opinions we would express in reference to the information - leave that to the North Koreans.

Dr. Brucker, do you hear yourself?

Using your own logic Dr. Brucker,  just because you say the department was cleared does not make it so!

"then people from the county would be requesting it and turning it over to proper authorities, which, by the way, have already cleared the health dept!"

Saying nobody was charged with a crime yet, would be a more truthful statement than the false claim that the health department has been cleared.

As far as being "cleared" Doc, have you complied with your OMA training as a board member on the Health Department?  Last FOIA reflected you had not.  Cleared huh?

Please read these comments yourself if you can keep from throwing your computer in the dumpster. But fair warning, you can't unread what you have already read.

I am in agreement with Dr. Brucker although I am not sure what the state or federal government defines as public interest. I would want a documentation from them in regard to how this will be used for public interest. If it is only to publish something that has their opinion I would say that is to promote themselves and to not disseminate the truth. If they are publishing something for the public benefit then I would want to know what their qualifications and license or permits that they hold to gather this information for the public. Otherwise I think that this is a hollow ruse to have a talking point about something that the know nothing about nor have the certification to make comments about. If they claim to be a news publisher then I would want to see their press credentials.

I'm NOT in favor of giving any breaks or reductions at all. Just because they say its in the public interest doesn't mean anything. If this is truly publican interest, then people from the county would be requesting it and turning it over to proper authorities, which, by the way, have already cleared the health dept!

Please see my email below to State’s Attorney James Devine regarding a FOIA request which will consume approximately between 2,000-2760 pieces of copy paper and in turn will cost the requesters between $300-$400.

You will notice the response from State’s Attorney James Devine regarding my question to him.

Please advise me as to what you would like for me to do regarding the negotiating the fees.

From: Jim Devine [mailto:jdevine]
Sent: Wednesday, May 01, 2013 3:15 PM
To: Cary Hagen
Subject: RE: FOIA REQUEST
Cary:
They have, of course, asked for a waiver and/or a reduction of fees because the request is in the “public interest”. The reduced charge is determined by the public body according to the FOIA.

Go ahead and process the request so that noncompliance does not become an issue. The reduced charge fee will be up to FIPHD (public body).

Let me know if you have any more questions.

I just spoke with Doug regarding the FOIA information that has been requested on Julie Clark. I have roughly figured the cost will be between $300 - $450 for this request. This does NOT include the copies of grants for the last 2 year.
I would appreciate it if you would contact Edgar County Watchdogs to inform them of the cost before I start copying these requests.
Thank you.
Cary E. Hagen
Financial/Support Services Coordinator
Ford-Iroquois Public Health Department
114 N. Third Street
Watseka, IL 60970
Phone: 815-432-2483
Fax: 815-432-2198

Sec. 9. (a) Each public body denying a request for public records shall notify the requester in writing of the decision to deny the request, the reasons for the denial, including a detailed factual basis for the application of any exemption claimed, and the names and titles or positions of each person responsible for the denial. Each notice of denial by a public body shall also inform such person of the right to review by the Public Access Counselor and provide the address and phone number for the Public Access Counselor. Each notice of denial shall inform such person of his right to judicial review under Section 11 of this Act.

The FOIA request was not properly denied. A lawsuit was filed. The public body cannot charge for copies since they previously denied the request improperly. 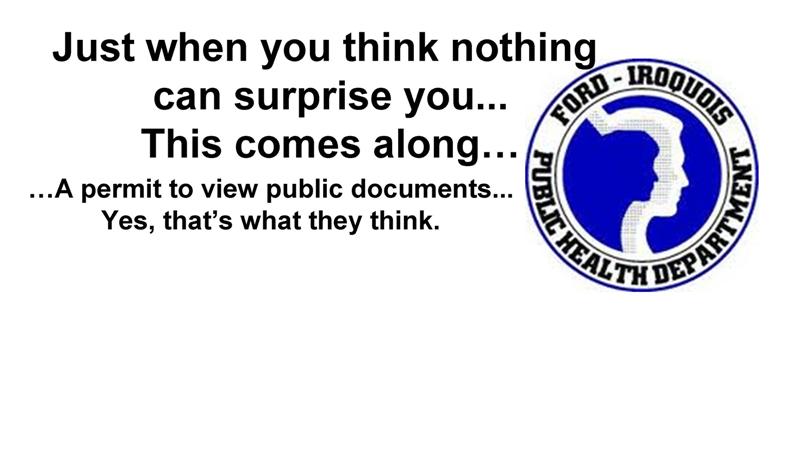